Video Fwd: NO to another NAFTA! Kim Kyung-Ran, Director of External Relations For Korean Confederation Of Trade Unions Joins Rally In SF

As the Obama administration moves closer to introducing the NAFTA-style Korea-U.S. Free Trade Agreement (KORUS FTA) to Congress, citizens and activists joined Kim Kyung-Ran, Director of External Relations for the Korean Confederation of Trade Unions, in a rally at San Francisco's new Federal Building to oppose the deal.

Representatives from labor, faith, environmental, fair trade, and family farm organizations called on Minority Leader Pelosi, Congress and President Obama to stop pursuing the KORUS FTA, an agreement expected to cost 159,000 American jobs and grant corporations in each country unprecedented rights to subvert public interest laws. President Obama, who campaigned against free trade agreements, has reached a revised deal with Korea, and is expected to introduce it to Congress for ratification soon.

The KORUS FTA is the Obama administration’s first potential trade agreement, and is a slight modification from the agreement negotiated by President Bush over three years ago. Since then, it has received little support from Congress or the public. In fact, according to an NBC/Wall Street Journal poll, 69% of Americans believe FTAs cost jobs, while just 17% think they help the American economy. This is not surprising, given that NAFTA-style trade deals have already cost Americans millions of jobs. --California Fair Trade Coalition
______________________________________
NO to another NAFTA!
Photos by Bill Carpenter Thursday Jan 20th, 2011 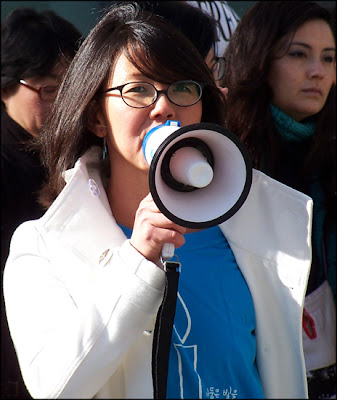 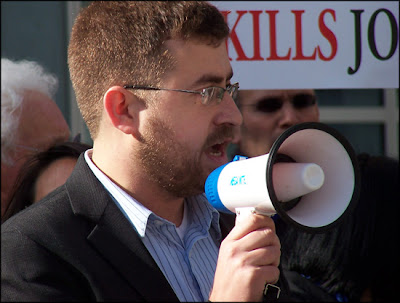 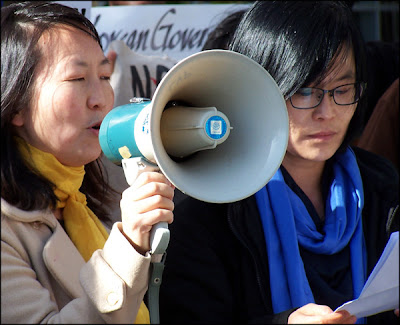 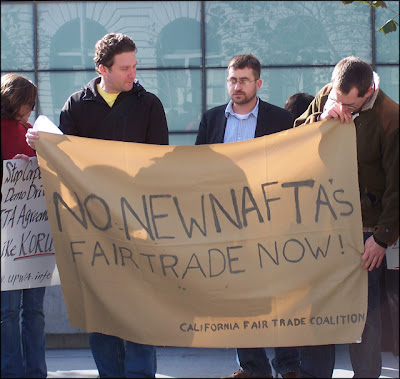 Posted by NO Base Stories of Korea at 9:21 AM