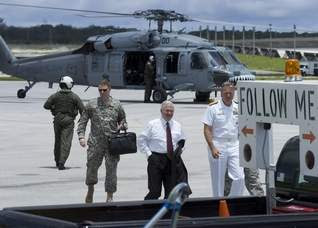 Buildup: Defense Secretary Robert Gates with Rear Adm. William French and others at Andersen Air Force Base after a helicopter tour during his visit to Guam on May 30, 2008 in this file photo. (Pacific Daily News file photo)

Defense Secretary Robert Gates said during a speech last week that smaller complications with the U.S.-Japan alliance, like Guam funding and the Okinawa bases, can distract from the reasons why allies must stick together -- specifically, North Korea and China.

Gates spoke at Keio University in Tokyo last Thursday about the importance of the U.S.-Japan defense pact. It's been in effect for about 50 years but has been strained on both sides by plans to shuffle American forces between Okinawa and Guam.

Gates said the alliance was born from "shared values" over how countries should treat their people and each other. Today, those values are still larger than the conflicts that have dominated recent headlines, Gates said.

During the speech, Gates explained why the two powerful nations to needed to preserve their partnership and why, despite controversy, some American troops needed to stay on Japanese soil. They were:
If the troops leave Japan, North Korea's recent military provocations could become "even more outrageous -- or worse"; and China, an economic superpower with a growing military presence, might "behave more assertively toward its neighbors."
"Even as President Obama has committed the U.S. to a strategy of engagement and cooperation -- with special emphasis on Asia -- we will continue to maintain the military strength necessary to protect our interests, defend our allies, and deter potential adversaries from acts of aggression and intimidation," Gates said. "To do this, we need a committed and capable security partner in Japan."

Yesterday, Gov. Eddie Calvo said that Guam's role in the troop relocation was directly linked with the growth of China, which could turn out to be a friend, competitor or both.

Guam is only one piece in an international relationship with a "massive," global scope, involving three of the most powerful on Earth, Calvo said. But Guam's large role gives the island leverage it never had before.

"It will be either the harmonious interaction, or competition, between the United States and China that will dictate the course of world events over the next 50 to 100 years," Calvo said. "And we will be right in the middle of it."

Guthertz said floundering public opinion in Japan and the financial concerns of a new Congress will probably delay the buildup a while more, but it will happen.

"The Department of Defense is very worried about China and they are very worried about North Korea," she said. "They can't protect our interests as a country, and the region's interest, without the buildup on Guam. So this buildup on Guam will proceed, but the timelines may be a little slower."
Japan trip
Gates' recent speech came at the tail end of a short trip to Japan, the same day he met with Japanese Minister of Defense Tosihimi Kitazawa to discuss the U.S.-Japan alliance.

During both the speech and a joint press conference, Gates spoke more about alliance conflicts in Okinawa than he did about Guam, but he was speaking to a Japanese audience.

The troop realignment will change the shape of both islands.

In Guam, infrastructure isn't ready for a population boom, so federal funding -- and money from Japan -- is slated to fund upgrades. The plan to build a firing range near the ancient village site of Pågat has led to protests.

In Okinawa, public opinion of U.S. forces is low, and prefecture Gov. Hirokazu Nakaima has vowed to oppose the troop realignment plan unless it removes all American bases from Okinawa.

Currently, the Defense Department plans to close the Futenma Air Base in Ginowan by moving many of the Marines to Guam and the airfield to Camp Schwab, another base in Okinawa.

Because of his authority under Japan's Public Water Body Reclamation Law, Nakaima could block a key component to the Futenma shift -- a landfill on reclaimed land in the Oura Bay.

The Defense Department once pressured the Japan government to proceed with the air base relocation, despite objections, but after his meeting with Kitazama last week, Gates took a softer tone on Futenma.

"We do understand that it is, politically, a complex matter in Japan and we intend to follow the lead of the Japanese government in working with the people of Okinawa to take their interests and their concerns into account, and that obviously needs to happen," Gates said, according to a transcript of the press conference.

Guthertz said Gates' new approach was a testament to the power of the Okinawan people. If the Defense Department can soften on Futenma, it can surely soften on Pågat too, she said.

"They are going to back off of Pågat. That's my gut instinct," she said. "They know it's a no-winner for them."

File downloads
Download the full text of Calvo's address here.
Posted by NO Base Stories of Korea at 6:18 AM