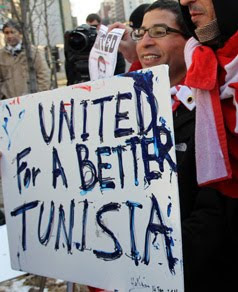 Back in 1969, when Secretary of State Clinton was researching her senior thesis at Wellesley on Chicago community organizer Saul Alinsky, she likely come across this saying of Alinksy's, which you can find in his book"Rules for Radicals":

Revolution by the Have-Nots has a way of inducing a moral revelation among the Haves.
Thursday, Secretary Clinton delivered what the New York Times called a "scalding critique" to Arab leaders at a conference in Qatar."The region's foundations are sinking into the sand," Clinton said, calling for "political reforms that will create the space young people are demanding, to participate in public affairs and have a meaningful role in the decisions that shape their lives." Those who would "prey on desperation and poverty are already out there," Clinton warned, "appealing for allegiance and competing for influence."
As Secretary Clinton made her remarks, the Times noted, "unrest in Tunisia that threatened its government while serving to buttress her arguments" was among the events that "echoed loudly in the background."
Friday, Tunisian president Ben Ali reportedly fled the country, and the Tunisian prime minister says he is now in charge.
Popular protest can bring down the government in an Arab country. Who knew?
It's a whole new ball game, as they say in Chicago. You think Friday's events in Tunisia are going to affect conversations in Algeria and Egypt? Maybe even in Haiti? I think they will. So does AP:
The shakeup was certain to have repercussions in the Arab world and beyond - as a sign that even a leader as entrenched and powerful as Ben Ali could be brought down by massive public outrage.

Could Secretary of State Clinton's remarks in Qatar presage a shift in US policy? It's not impossible to imagine. After all, Clinton's senior thesis pointed to the idea that there's another path to reform besides revolution in the street. Leaders can anticipate. You don't have to wait until protesters are at the gate. You could take the long view.
Today, US policy in Haiti stands at a fork in the road.
READ MORE