Text Fwd: ANOTHER ISLAND BASE 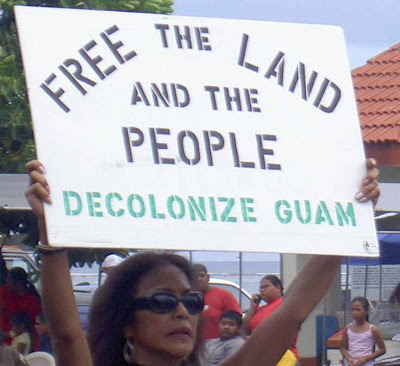 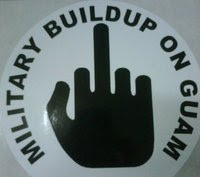 Bruce Gagnon's Organizing Notes
Monday, January 24, 2011
ANOTHER ISLAND BASE
I've written alot about the problem on Jeju Island in South Korea. But there are other islands in the Pacific that are undergoing tremendous expansion by the Pentagon and I think it is important to remind people about the larger strategy underway.

In a 2005 article entitled Pentagon begins military buildup on Guam the author wrote, "With China looming as a potential adversary and thousands of Marines moving out of Japan over the next several years, the Pentagon is turning its eye to Guam, the westernmost U.S. territory and an attractive launching pad for Pacific operations."

Later in the piece this appeared: "Guam and other U.S. land in the Pacific provide one major advantage over stationing troops in friendly countries: It is territory the military does not have to negotiate access to, said Robert Work, a naval analyst at the Center for Strategic and Budgetary Assessments."

"All of the islands that we own over time -- if we're going to be operating in the Pacific a lot -- will tend to be very, very important," Work said.

The Pentagon wants to expand operations on Guam so it can host aircraft carriers, drones, and thousands more troops. New environmentally pristine and sacred lands are slated to be taken over for the increased military presence.

It has been difficult for the people of Guam to oppose U.S. militarism because it was America that liberated the island from the brutal Japanese colonization. But a growing movement to resist U.S. base expansion is happening and people are increasingly thinking and talking more about what their "status" should be.

Michael Lujan Bevacqua lives on Guam and teaches at a local university. I met him last year when we both traveled around South Korea together. He helps to organize opposition to the expansion of U.S. militarism on Guam and has an interesting blog called "No rest for the awake."

In one of his recent posts he talked about this issue of colonial status:

Guam is one of the last “official” colonies left in the world and the fact that we are so clueless about our status and so apathetic as an island to changing it is a travesty. We are a colony in denial about being a colony and sometimes it seems that our number one industry is neither military nor tourism, but rather making up excuses as to why it is either alright or necessary that we remain a colony.

This is understandable given that Guam is a pretty “comfortable” colony, but that does not change the fact that Guam’s relationship to the US is fundamentally not one of equality, but of ownership. Although Guam is the recipient of “state-like” treatment, we are not a state, we are a possession, an unincorporated territory, and so while we may want to feel that our relationship to the US is just like any state, any other corner of America, it is not, and we do ourselves little good by pretending it is otherwise.

Despite what most may think, our political status is not a minor issue, but literally affects everything on this island. Where you stand on Guam’s current colonial status and what you think (or don’t think) about what should happen next goes to the core of how you are a person of Guam. How you live here, what you feel about this place, what you think it’s capable of and where you think it should go next.

I like what Michael is doing here. He has decolonized his mind and is now offering others the challenge to do the same. This is a necessary first-step in making it possible for people to begin to think about how they feel about their beautiful and peaceful island being one more "power projection hub" for the U.S. military empire.

http://tenthousandthingsfromkyoto.blogspot.com/2010/12/not-surprise-imperial-japan-attacked.html
Posted by NO Base Stories of Korea at 4:00 PM