[Site Fwd:Peace Philosophy Center]Nago Mayor Inamine, one year after the election: "The government must accept the all-Okinawa 'NO' to the new base." 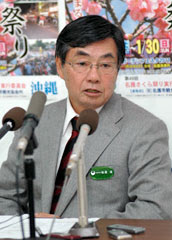 Peace Philosophy Center
Nago Mayor Inamine, one year after the election: "The government must accept the all-Okinawa 'NO' to the new base."
Thursday, Jan. 20, 2011

A year has passed since Inamine Susumu won the Nago mayoral election of January 24, 2010, on the platform that he would not allow a new US military base to be built either on land or on the sea. A year later, he is firm and committed on his principle of creating a thriving community not dependent on subsidies in exchange for hosting bases. Here is a summary of Rykyu Shimpo's interview with Mayor Inamine, on January 20, 2011.

- How would you reflect the past year?

I won the election on the pledge that I would neither allow a new base on land nor on the sea. After the election, I repeatedly demanded the government to accept the result of this election. The Prime Minister and other ministers heard me, but they would not change their position, and reached the US-Japan joint statement on May 28 (one that confirm the two governments' intention to build a base in Henoko). Futenma issue is a big political challenge, and the situation now (under the DPJ government) is even worse than that of LDP/Komeito. In the last gubernatorial election, even Governor Nakaima, who had previously supported the Henoko base plan, changed his position and put forward an election agenda "to review the US-Japan agreement and to relocate MCAS Futenma to outside of Okinawa." This is the reality of Okinawa.

- What is your thought on the government's response?

The government's actions and words make me believe they are just trying to make US happy. The Japanese government should demand US for reduction of Okinawa's base burden instead of trying to convince Okinawa. I have stated that I will resolve the Futenma issue, but the situation has not changed unfortunately. I will keep fighting, gathering support from across Okinawa to keep my promise with people of Nago.

- The "Realignment Subsidy" (one given to base-hosting communities as base construction proceeds) was frozen by the government.

The "carrot and stick" nature ("carrot" as subsidies, and "stick" as base-hosting burden) of the government's policy has come to surface. I want to seek alternatives, with the help of Nago city staff members. This is a big challenge for the new year.

The mayoral election (a year ago) was the result of Nago citizens' assessment of the last ten years of the development policies. We won't make the same mistake again. People of Nago hardly benefited from the "carrot" (subsidy income). We will no longer be lured into accepting a new base by the idea of further subsidy.

- How would you work with the Governor?

Governer (Nakaima) pledged for the Futenma base to move outside of prefecture. I would like to work with him wherever I can. (Regarding Nakaima's plan to visit US) If the Governor wants us (other municipal leaders) to go with him, it may be more effective. We have to work out details.

- What is your message to the government?

The voice of Okinawans is clear. Since the Nago election last January, most of the subsequent elections were won by candidates who opposed a new base in Okinawa. It is an all-Okinawa "NO." The government must accept this.

For more information on the current situation and the history of base opposition and political situations in Nago, see following articles.
READ MORE
Posted by NO Base Stories of Korea at 8:49 AM