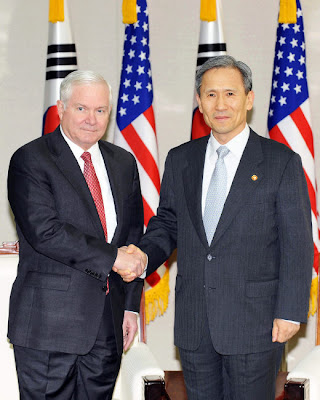 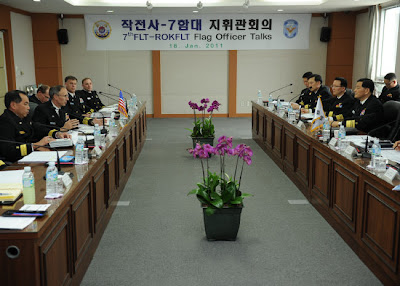 * Image source: same as the link
Ministry of National Defens, Recent News No. 705
Korea and U.S. Navy discuss to boost joint operations
Jan. 19, 2011 (uploaded on Jan. 26, 2011)
Naval Force Operations Command of South Korea and U.S. 7th Fleet held Flag Officer Talks at the command on Jan. 18 and reaffirmed joint principle of strong retaliation from further attacks by North Korea.
Ten senior naval flag officers, including Vice Adm. Hwang Gi-cheol, commander of Naval Force Operations, and Vice Adm. Scott Van Buskirk, commander of U.S. 7th Fleet, had a meeting at the command and discussed in-depth how to strengthen joint operational capabilities aimed at deterring the North's military provocations and maintaining peace on Korean Peninsula.
Vice Adm. Hwang Gi-cheol, far right, commander of South Korea Naval Force Operations, and Vice Adm. Scott Van Buskirk, second from left, commander of U.S. 7th Fleet discuss measures to reinforce joint operations capabilities at the command on Jan. 18.
In particular, the meeting was the first major military talks for operations command in both countries this year.
During the talks, six detailed agenda were on the table : assessment and development measures for South Korea-U.S. joint military drills, measures to improve joint C4I (Command, Control, Communications, Computers and Intelligence) operations, developing defense plan for islands on the Yellow Sea, assessment of lessons from the Cheonan sinking and the Yeonpyeong Island shelling, ways to improve intelligence sharing and assessment of maritime training with aircraft carrier on the Yellow Sea.
Both sides agreed to manage and control pending issues in the navy of two countries and planned to keep on carrying out major agenda.
"The meeting was a great opportunity for two countries to strengthen South Korea-U.S. alliance as well as reaffirm solid joint combat capabilities by seeking detailed measures," said a naval officer under the command.
_________________________________
See also
Ministry of National Defense, Recent News No. 704
Kim and Gates agree to continue joint drills
Jan. 17, 2011 (2011-01-26)
EXCERPT
Gates said that South Korea and the United States need to continue joint maritime military drills on all seas around the Korean Peninsula to deter additional attacks by the North.
[..]
The defense official added that the two discussed responses to attacks from the North and touched on various military topics, especially joint training drills and the ROK-U.S. Strategic Alliance 2015.
Posted by NO Base Stories of Korea at 12:38 AM