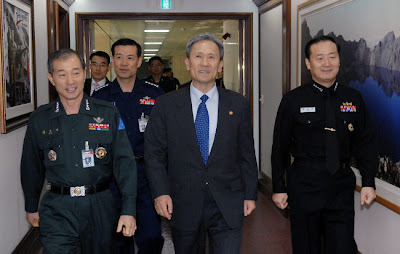 'Defense Minister Kim Kwan-jin, center, heads toward a meeting room with chief of staff of each Army, Navy and Air Force to receive reports on plan for this year from each military at Gyeryongdae, South Chungcheong, on Jan. 12. By Hong Seung-wan'

Korean Army, Navy and Air Force vowed to improve their strong combat will to fight and win by making all troops mentally strong and prepare for robust combat readiness.

The three military also promised to proceed with strong defense reform this year.

In his first round of inspection of headquarters of Army, Navy and Air Force in Gyeryongdae, South Chungcheong, the Defense Minister Kim Kwan-jin received duty report, including three major reform issues, for this year from three military sectors.

The Army said it is planning to establish strict and fundamental operational principle in order to prepare for enemy's provocations and strengthen field command capabilities. Units in front line will have their military power reinforces and supplemented so that troops in those units can show field combat force all the time, said the Army.

In addition, the Army said it is planning to train recruited soldiers to become fighting warriors, foster officers to become experts in combat and tactics and develop field units through real warfare training programs. It will also promote 57 reform assignments among 73.

The Navy vowed to carry out a training program to foster true combat sailors with strong mental armament and create an atmosphere of giving considerate treatment to sailors with excellent combat performance. It said that the Navy will select one troop in each rank twice a year to give a privilege.

Most of all, physical training for sailors will be strengthened so that sailors can fight and win against all odds, said the Navy.

The Navy is planning to create a system of promotion comprehensive assessment to foster competent naval officers.

The Air Force said it will beef up emergency standby force in normal in order to establish instant counterattack posture under self-defense right. In particular, the Air Force reported that it is implementing periodical training and maintaining combat readiness so that it can put into action right away in case of enemy's sudden attack.

In regards to defense reform, the Air Force will create and operate task force for Air Force reform and set up concrete action plans this month.

"Pour all effort to make military that can fight and win at once by breaking down the long-held bureaucratic tradition in the military," said Kim after he received reports.
Posted by NO Base Stories of Korea at 7:05 AM