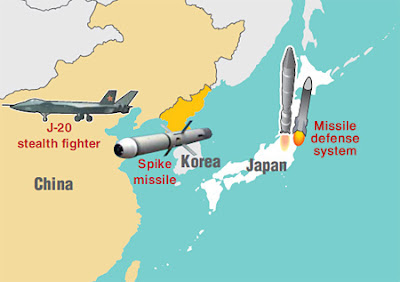 Some defense watchers note that East Asian nations are becoming more conservative of late, voicing concern that this could raise the possibility of an arms buildup in the region.

They allege that an assertive China and provocative North Korea together are playing a role in changing the security landscape, adding this could motivate regional players to upgrade their weapons’ capability.

The concern was addressed days before U.S. President Barack Obama will meet with his Chinese counterpart Hu Jintao in Washington to discuss issues of mutual concern.

The Obama-Hu summit coincides with a growing concern in Seoul over the Cold War-like confrontations between the blocs of South Korea, the United States and Japan, and China and North Korea looming large on the Korean Peninsula.

“When China bashes Japan about the islands (Senkaku in Japanese and Daioyu in Chinese); that has a strong impact on Japanese behavior and also on Korean behavior,” a U.S. defense expert told The Korea Times last week on condition of anonymity.

“North Korea on the nuclear front especially prompts the Japanese to think that a missile defense system is good, but I think Chinese behavior is much more important in shaping the general need for security in the region.”

The expert noted that there was a possibility of an arms race in East Asia.

His remarks came days after photos and images of a Chinese radar-evading stealth fighter, the J-20, surfaced.

The Chinese version of “a show of force” came at a time when Seoul and Tokyo agreed to seek their first-ever bilateral military agreement after Washington called on the two sides to work closely to deter North Korean aggression.

While seeking military ties with Japan, the South Korean military announced a plan to deploy Israeli-built precision-guided anti-tank missiles on Yeonpyeong Island in February. The island was devastated by a deadly North Korean attack last November.

The embryonic trilateral military partnership among South Korea, Japan and the United States appears to have made China uncomfortable.

William Tobey, senior fellow at the Harvard University Belfer Center for Science and International Affairs, told The Korea Times last week that some Chinese have complained that the ties were aimed at countering China.

Tobey travelled to China before arriving in Seoul. The former U.S. National Security Council staffer met with several academics there and made the point that China needed to do more to rein in North Korea as the latter’s provocations work against its interests.

Although Japan said the plan was focused on North Korea after it sank the warship Cheonan in March, unveiled an enriched uranium program and shelled Yeonpyeong, China reacted nervously.

A Chinese diplomat was quoted as saying in December that China will have no other choice but to respond by enhancing its own military capabilities.

The U.S. defense chief told reporters that he learned “the test spin of the stealth fighter had absolutely nothing to do with the visit and had been a pre-planned test.”

However, Gates expressed worries over Beijing’s progress in developing anti-ship cruise and ballistic missiles as he believed this could potentially target U.S. vessels in East Asia.

Asked about Chinese motives behind the timing of the test of the fighter, William Tobey speculated there might be a rift among Chinese policymakers over the decision.

“It’s totally difficult to speculate on their motives. The Chinese government may not be united. It may be that some people wanted to point this out regardless of what President Hu wanted and took advantage of that timing to reveal their firepower,” he said.

Tobey stressed that North Korea’s bad behavior increases the need for missile defense and this makes for a continuing presence of U.S. troops on the Korean Peninsula.

It may increase the proliferation of nuclear weapons and other things that run counter to Chinese security interests, he noted, adding it was less North Korea but “the China factor” behind East Asian nations’ interests in missile systems.

“I think Chinese behavior last year has also been provocative. It’s not clear why. Whether the People’s Liberation Army has been enhanced or whether there is a succession crisis in Beijing. Everyone is moving to the right,” the U.S. expert said.

Xi Jinping, vice president of China, was appointed last October as one of the vice chairmen of the Central Military Commission, a move seen as a key step toward his succession in two year’s time.
Xi is reportedly on track to become Communist Party general secretary when President Hu Jintao’s term ends in 2012 and President in 2013.