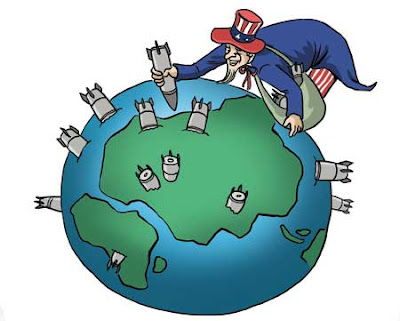 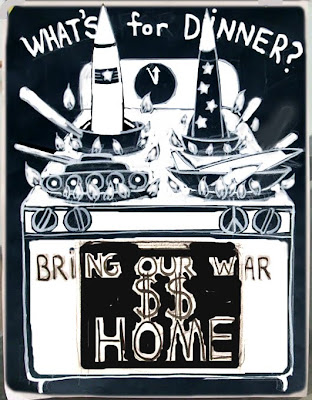 The other day I saw a story on the TV news that the city of Camden, New Jersey was laying off a bunch of firemen and police due to their budget crisis. I wonder if any of those being let go thought about war spending? It would have been great if these angry public service workers would have gone on the news and said something like, "If we were not wasting $10 billion a month in Afghanistan I wouldn't be losing my job today."

In yesterday's Washington Post an article called House GOP group proposes deep spending cuts over next decade reported that Republican proposals in the House of Representatives would require cuts of about 15 % at agencies other than the departments of Defense, Veterans Affairs and Homeland Security. The Republican Study Committee (a Tea Party group) plan, by contrast, would reduce most agency budgets by about 30 %.

If cuts were made on that magnitude the Post said, "The federal prison system would have to fire 5,700 correctional officers, the Agriculture Department would have to cut about 3,000 food safety inspectors, and the Head Start early-childhood education program would be forced to cut about 389,000 children from its rolls."

Here in Maine, the state has a budget shortfall of $800 million and heavy cuts will be made this spring. Public education and social spending will take another huge hit. That means more school closers, teacher lay-offs, cuts in grants to social service delivery groups, and cuts in health care assistance to the poor, elderly, and mentally ill. Wouldn't it be nice to turn on the news and hear the teachers union or social service leaders talking about the need to end war spending so those funds could be shifted to the states that are in fiscal crisis?

Imagine the massive lay-offs all over the nation as the federal government cuts social spending and the states do the same thing. Where will these folks find new work? Answer: they won't.

I recognize that the nation has a large budget deficit and something must be done to deal with it. But rather than shut down social progress, wouldn't it be much better to end the occupation of Iraq and Afghanistan and stop the widening war into Pakistan? If those funds were brought home and invested in our society we'd not only see a big change in our debt crisis, we'd also stop the hemorrhaging of jobs.

These are the points that are not being talked about in the mainstream media. It is obvious that the oligarchy is closing the door on any public discussion except for ways to destroy social progress and return us to a feudal society.

What do you think we can do to spur this much needed debate?
Posted by NO Base Stories of Korea at 9:08 AM