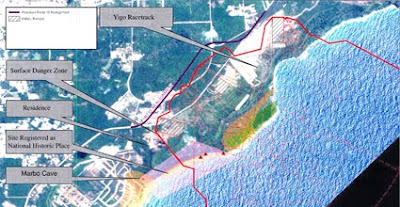 Guam - In contrast to a statement released yesterday [Thursday] by the Governor and the visiting federal delegation, "We Are Guåhan" today released a statement of its own arguing that the Department of Defense actually plans on acquiring more land and claiming that DoD's plans for Pagat remain unchanged.

The statement is printed below:

Although DoD plans to “acquire” Pågat Village and the surrounding area – including the Guam International Raceway Park – DoD officials verbally promised “un-impeded access” to Pågat Village. This suggestion is similar to the one made by Undersecretary Jackalyn Pfannenstiel soon after DoD was sued by the Guam Preservation Trust, We Are Guåhan and the National Trust for Historic Preservation for not following the law.

For over a year, the people of Guam have opposed DoD’s plans to acquire any additional land or to build a firing range complex at Pågat Village. DoD’s continued plans of “acquiring” over 1,000 more acres of land and firing around and above Pågat Village do not address these concerns. “Un-impeded access” to Pågat Village was never the issue.

“The messengers may change, but the message remains the same: DoD plans on taking Pågat,” says We Are Guåhan member Cara Flores-Mays. “Pågat, and what it represents, is worth more to our island than vague promises of returning land that was taken from our people decades ago.”

Responding to DoD’s proposal is Governor Calvo’s first opportunity to fulfill his promise to the people of Guam that he will not abandon Pågat, and that the Calvo Tenorio administration will not agree to DoD expanding beyond its current footprint.

Governor Calvo ran on the promise that Pågat is not for sale. This means that he would never allow DoD to fire bullets over or around the graves of our ancestors. This means that Pågat will not be traded to DoD in exchange for the return of thousands of acres of land DoD currently owns but does not use, or a promise to ask Congress for money to pay for a museum and cultural center.

“Machine guns being fired overhead, and grenades blowing up in the distance, are unacceptable impacts on Pågat Village and the people living in the surrounding area,” says Flores-Mays. “We Are Guåhan will not give up on Pågat.”
_________________________________
See also
Pacific News Center
Navy Under-Secretary Work: DoD Determined to "Continue to Listen to the Government & People of Guam"
News Release
Friday, 21 January 2011 10:30