[Jeju Update] "This coldness can’t stop the will of the Gangjeong villagers." 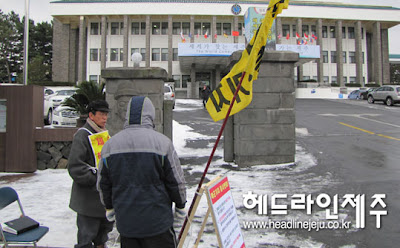 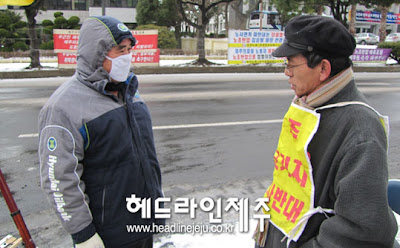 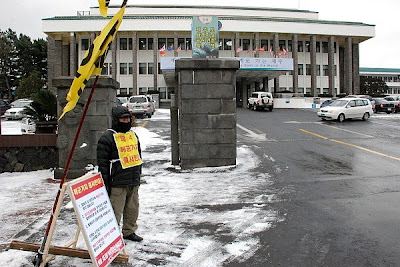 Mr. Lee Jong-Hwa who joined the one man protest against naval base introduced himself that he is not a Gangjeong villager from the Jeju Island but a poet farming tangerine in the Jeollabuk-do.
Mr. Lee, a member of Association of writers for National culture (* translated) Institute for Research in Collaborationist activities, and Solidarity for Peace And Reunification of Korea has visited Gangjeong on last Dec. 27.
He joined the Pan-Island Committee’s press interview against naval base construction and taken away by police with other 33people.

He criticized that “While the Jeju Island people and Gangjeong villagers are suffering like this, the people who are supposed to represent the Island people and citizens are on their warm chairs. It is nonsense. If they really represent those, they should stand here, in place of the Gangjeong villagers.
Posted by NO Base Stories of Korea at 7:22 AM