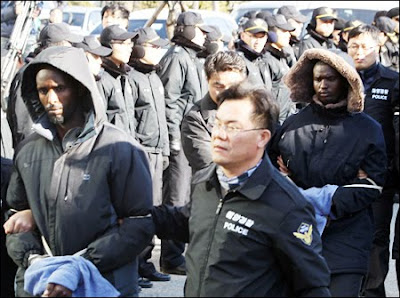 Five Somali pirates that have been brought to Seoul partly admitted their involvement in the hijacking of the 11,500-ton Samho Jewelry in the Arabian Sea on Jan. 15. But they denied shooting the ship’s captain, investigators said Sunday.

“We showed the pirates the ladder and speed boat that were used in hijacking the freighter. We asked them whether they used them, and they replied they did,” an official of the special investigation team led by the Korean Coast Guard was quoted as saying by Yonhap News Agency.

Earlier, a Busan court approved the arrest of the pirates, who were captured during the recent rescue operation of the freighter in the Arabian Sea. The five were brought to the southern port city at 4:18 a.m. on a royal jet belonging to the United Arab Emirates.

The 58-year-old captain was seriously wounded and is currently receiving treatment at a hospital in Suwon, south of Seoul. The ship’s other 20 crewmembers were rescued unscathed, while the remaining eight Somali pirates were killed.

The pirates, whose ages range between 19 and 25, entered the court dressed in winter clothes wearing sneakers provided by the Korean Navy.

Despite the beginning of Korea’s first prosecution of suspected Somali pirates, there was skepticism about penalizing them due to the complex legal process and language barrier.

If the five pirates are found to be guilty of the attempted murder of the captain, the hijacking and holding the 21 sailors hostage for ransom, the court could sentence them to life in prison.

Coast Guard investigators said they had already secured enough evidence, including seven Korean sailors’ statements and video clips capturing the entire military operation that can be used to prove the pirates’ guilt.

If the pirates are not cooperative, they plan to dispatch a team of investigators to Oman to question the Korean sailors aboard the chemical carrier to get further evidence. The latter are still aboard the Samho Jewelry as the Omani authorities will not let the ship dock as it still has the bodies of the eight dead pirates on board.

The language barrier is widely cited as a primary setback to the prosecution. The Coast Guard hired a Somali interpreter who can also speak English fluently and a local national to translate Korean into English, and vice versa to facilitate the investigation.

Experts pointed out that the consecutive interpretation during the investigation and trial may make it difficult for investigators to effectively interrogate the Somali men.

Under the U.N. Convention on the Law of the Sea, sovereign nations are entitled to seize and prosecute pirates. But many governments send the pirates to a third country such as Kenya because of difficulty in prosecuting them.

The nations that signed the agreements for bringing pirates to justice in the African nation on their behalf include the United States, United Kingdom, Canada, China and Denmark. These nations are committed to giving financial support to Kenya to cover the costs needed for the investigation and trial.

Last year, Kenya announced that it would no longer take on any more prosecution of pirates as some nations have failed to keep their word.