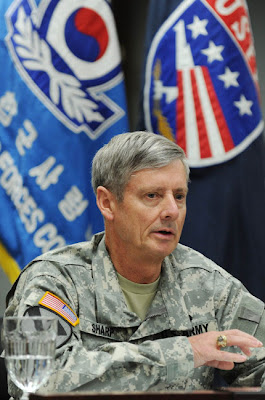 ROK-US Combined Forces Command has announced that troops from the US Army 2nd Infantry Division, stationed in Korea, will take part in joint training exercises between the United States and the Philippines, to be held from April 5 in the Philippines.

This is the first time a part of the United States Forces Korea (USFK) has taken part in an overseas training exercise. As such, it is an important event that tells us that the character and role of the USFK is changing.

According to the mutual defense treaty between the Republic of Korea and the United States, the role of the USFK is to defend the Korean Peninsula. Consequently, deploying the USFK to neighboring regions, or throughout the world strategic flexibility, in other words goes beyond the bounds of this role.

If the character of the USFK changes this way, Korea may be forced to take part in regional and global conflicts in which the US participates. The worst case scenario is that where the USFK intervene in a conflict between mainland China and Taiwan, reducing the status of the Korean Peninsula to that of a US military supply base and eventually bringing conflict to Korea itself.

This may just be a training exercise, but strategic flexibility, when it ceases to be a mere plan and enters the realm of specific implementation, cannot but be a source of serious concern regarding peace and stability on the Korean Peninsula.

How can it be that this exercise is going ahead as if nothing is happening? The Korean government and even the Korean people appear uninterested. In 2006, Korea and the US reached a compromise that stated explicitly that, rather than Korea recognizing the strategic flexibility that the US wants, the United States "respects Korea's stance that Korea will not enter into any conflict in the Northeast Asian region irrespective of the will of the Korean people."

Criticisms have been made, however, that a single such sentence, which merely amounts to a principled expression of opinion, may not be able to remove the risk of strategic flexibility.

Since the Lee Myung-bak administration took office, even this principle has disappeared. On the contrary, this government has consistently made policies that support strategic flexibility, as can be seen in the 2009 "future vision" of the Korea-US alliance.

The US is taking advantage of this atmosphere by effectively running its 2nd Infantry Division on a rotational basis. USFK commander General Walter Sharp emphasized last December "the need for USFK to intervene on a slightly more regional basis and be stationed around the world."

Flexibility takes as a precondition a reduction in the threat from North Korea. But since the Lee Myung-bak administration took office, tension has actually increased, including the breakout of military clashes between North and South, due to hard-line South Korean policies toward the North.

The government, moreover, has even delayed the transfer of wartime operational control from the US to Korea until 2015, on grounds of the increased threat from North Korea. It is a mystery, however, why the government considers flexibility to be acceptable.

A few days ago, the Eighth U.S. Army Command announced plans for around 500 soldiers from the 2nd Infantry Division reconnaissance battalion stationed in South Korea to take part in joint U.S.-Philippines exercises taking place in the Philippines beginning Apr. 5. Previously, United States Forces Korea (USFK) soldiers have participated in overseas exercises at the small scale of a few dozen troops or so, but this marks the first time an entire unit is being dispatched. This marks a serious development, as the United States has begun moving its forces according to its strategy of “strategic flexibility.”

Based on this strategy, the United States plans to operate its forces for rapid maneuvering rather than leaving them as a fixture in any one region. In the wake of the 9/11 terrorist attack, the United States has pushed for these policy changes in the interest of making effective use of its forces overseas. Its intent is to broaden the scope of the USFK’s placement rather than tying them to the role of deterrent against North Korea according to the Mutual Defense Treaty between the United States and South Korea.

However, the U.S. military’s free coming and going overseas from a base in South Korea, without any controls from the South Korean government, is not a matter that can simply be overlooked. The possibility exists that South Korea may end up unwittingly embroiled in a conflict in another nation or subjected to unnecessary suspicions. Given the delicate interweaving of potential causes for tension on the peninsula and in East Asia, it is reasonable to have serious concerns about this aspect. As an immediate example, Beijing has been expressing keen alarm over the USFK’s role as a curb against it.

In light of these factors, South Korea and the United States agreed on a set of principles regarding the USFK’s strategic flexibility in January 2006. At this time, Seoul agreed to show understanding for Washington’s change in global military strategy and respect the need for strategic flexibility with the USFK. The United States, for its part, agreed to respect Seoul’s desire not to get involved in any regional conflicts in Northeast Asia irrespective of the South Korean people’s will. The problem is that no subsequent procedures were properly instituted to manage the enforcement of these principles.

For instance, last October’s Security Consultative Meeting between South Korea and the United States failed to produce a consensus, with Seoul requesting the institutionalization of prior discussions when applying the strategic flexibility concept, and Washington declaring that it would merely provide notification.

With this latest decision, the U.S. Eighth Army merely provided a brief announcement of the fact that the reconnaissance battalion would be taking part in the exercises. Neither the Combined Forces Command nor the South Korean Ministry of National Defense provided any explanation about the process. It is not normal for South Korea to merely receive unilateral notification without any preliminary discussions when a USFK unit is transferred. We hope the South Korean and U.S. military authorities will engage in sincere discussions and disclose details about the process. (Please direct questions or comments to [englishhani@hani.co.kr] ) 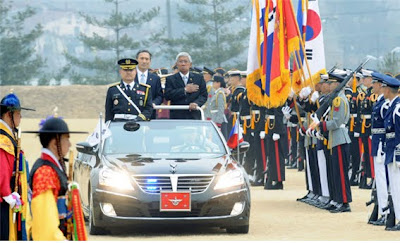 South Korea's Defense Minister Kim Kwan-jin, rear left, and his counterpart Voltaire Gazmin of the Philippines at a welcoming ceremony at the ministry in Seoul on Mar. 14. After the welcoming ceremony, two ministers discussed ways to boost bilateral defense exchanges and arms trade, the ministry said. It also said that they exchanged opinions related to regional security matters.

Earlier on Mar. 13, Gazmin landed on South Korea for his four-day visit here. Gazmin visited the Seoul National Cemetry in Dongjak, Seoul, and a 1950-53 Korean War Veterans Memorial for the Philippines in Yeoncheon, Gyeonggi, to pay solemn respect to war deads.

Gazmin have also toured major defense firms. Filipino defense minister, who had served as a commander-in-chief of the Philippines Armed Forces and the ambassador to Cambodia, took ministerial position since June last year.

The Philippines, one of South Korea's traditional allies, had sent some 7,400 troops each year during and after the Korean War between September 1950 and 1955 to fight for freedom of South Korea.

After signing memorandum of understanding related to cooperation on defense and war industry with the Philippines in May 1994, South Korea had either donate F-5A fighters, Patrol Killer Medium and T-41 jets for entry level pilot training for free or sold them.

Posted by NO Base Stories of Korea at 8:07 AM