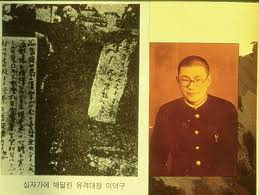 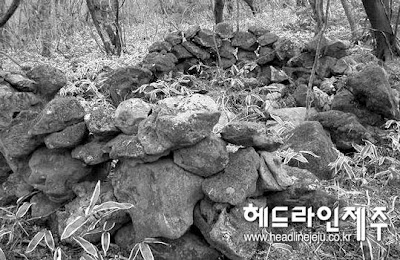 How is the world
Where you are living now?
Is the world
Where human beings live as the true human beings?
Has the world become
What we have aspired to establish at the expense of our lives?
If it is such a world
I may dance
If not,
Start again now at this moment
That is what I
And we, the people in the Jeju Island
Hope.
Please do not abandon us
Who have sacrificed our lives

The ‘Yi Duk-Goo Sanjeon’ is so called ‘Sianmoroo,’ where the residents of Bongaeri have made a refugee from the winter of 1948 to the spring of 1949. Through the winter, the Yi Duk-Goo resistance unit has stayed here for a while and there are some people who even tell that it is the last place of Yi Duk-Goo. That is why it is named after Yi Duk-Goo. The Yi Duk-Goo Sanjeon (* The word, 'Sanjeon' means 'mountaine field' in translation) may be the single site whose location name is added with person’s name in its front among the 4.3 remaining sites.

We have not died yet.
Our struggles have not finished yet.
Even though my body parts have been scattered with rain and wind
Even though the flags do not flutter any more
Through the dense and bare forest
Through the wind sound being wound around
Through the crow sound
Please tell, trees, stones, and grass flowers
Please tell, becoming eco
Between the roots of trees among the rocks
The boiling blood of the Adonis amurensis
Would stand up through snow
We have never stopped our struggles 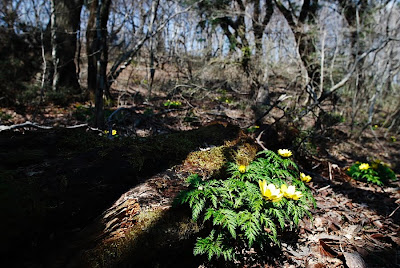 A Man of face all over with pits, Duk-Goo, Duk-Goo, Yi Duk-Goo, Future commander! A Synonym of Jeju 4.3 but a person not acknowledged as the victim of Jeju 4.3

A figure of thoroughly being tabooed as much as his bereaved family members could not report, not to mention acknowledgement. A revolutionist with the most pathetic misfortune with all his family members annihilated and completely abandoned from the South, North and even the Jeju Island. He meets his last end near the so called Gaori oreum around 4pm, in the afternoon of June 7, 1949. It is known as the established theory that he made suicide during the engagement with the police whom his followers who had betrayed him drew into him.

The corpse of Yi Duk-Goo was to be exhibited in the Gwandukjung square in the Jeju City. That succeeded its tradition in the very place where the heads of the people revolutions in the Jeju Island in the history were decapitated and hung. It is told that his corpse was exhibited for a day and cremated in the Naechang called Namsoogak near the area but because of heavy rain next day, its ashes were drift away.

At the time of Jeju 4. 3 the subjugation units made half of his great-grandmother’s tombstone by shooting it which had been located at the Jikyung, Hoechun, Jeju city. As of today, 2011, the site for the house of his birth, located in the Shinchon-ri, Chochun-eup, has been buried by the coastal road that was newly open. The destruction named violence and burial named development are being continued without exception throughout the past and present.

I ruminate again in the Yi Duk Goo Sanjeon. The Jeju 4. 3 should not be the matter of the left and right but the matter of right and wrong. 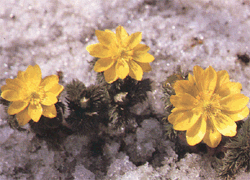 Posted by NO Base Stories of Korea at 9:04 AM