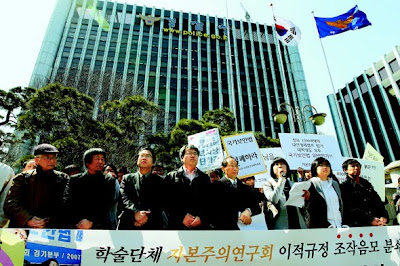 Professors, students, civic organizations and National Assembly lawmakers hold a demonstration urging the police to end their investigation into members of the student group “Capitalism Research Society” in front of the Korean National Police Agency headquarters in Seoul, Mar. 23. (Photo by Lee Jong-keun)

The Korean National Police Agency (KNPA) National Security Bureau, which is currently investigating the university student academic group Capitalism Research Society, requested an arrest warrant Wednesday for the group’s first president. The president is a 37-year-old individual identified as Choe, and is being pursued by the KPNA on charges of violating National Security Act proscriptions against praising and encouraging North Korea by forming a group working in the interest of the enemy. Opposition parties vocally protested what they called “fomenting the atmosphere of a police state.”

Police announced Wednesday, “Choe and others, after organizing a pro-enemy group called New Generation Young Communists’ Red Flag in 2006, allegedly established subsidiary organizations in March 2007, including the Capitalism Research Society, with the goal of praising and encouraging North Korea.”

Police explained that the group adopted action guidelines of a character clearly beneficial to the enemy at the Alternative Economy Camp in January 2008, and that it has posted writings of a pro-enemy nature on the Internet on thirty occasions.

On Monday, police released two former group members who were arrested along with Choe, a 35-year-old also identified by the surname Choe and a 24-year-old identified as Ha.

Police conducted searches and seizures Monday on the houses of twelve former representatives and members of the group and confiscated a collection of materials from the Alternative Economy Camp, computer hard disks, and USB devices. They plan to summon all of the suspects subjected to searches and seizures individually for questioning.

Opposition parties were unanimous in their criticism of what they called “fomenting a police state.”


“Applying the National Security Act’s proscription on praising and encouraging the enemy to a public academic group is an act that forces students and citizens to engage in self-censorship,” said minor opposition Democratic Labor Party (DLP) Chairwoman Lee Jung-hee, appearing Wednesday morning on MBC radio “There is a strong likelihood that this will curtail the raising of issues about tuition and other matters by university students and lead things toward a police state situation.”

READ MORE
Posted by NO Base Stories of Korea at 8:57 AM