Text Fwd: The Return of Pan-Arabism Amidst Upheaval: An end to Balkanization? 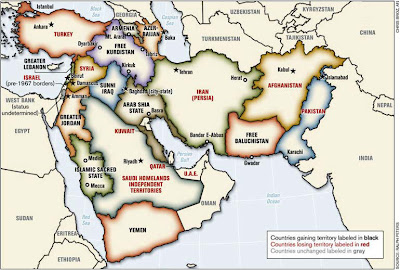 Global Reserach
The Return of Pan-Arabism Amidst Upheaval: An end to Balkanization?
:The Changing Winds in Iraq and the Growing Threat to Lebanon
By Mahdi Darius Nazemroaya
March 14, 2011

Protests and revolts have swept across the whole of Arabdom, from the Atlantic coastline of Morocco to the shores of the petro-sheikhdoms of the Persian Gulf. In this regard, U.S. and E.U. double-standards are being applied to these events. There is a selective focus and condemnation by the White House and the European Union at play in regards to which Arab protests and protest leaders they support.

Regardless of the direction of these revolts and protests and the reaction of outside players, a new dynamic is taking shape. Democracy has not yet emerged, what is beginning to emerge is a new wave of pan-Arabism. This re-invigorated pan-Arabism will prove a challenge to the ongoing efforts to further fragment and weaken the Arab World.

The Categories of Protest and Revolt in The Arab World

In regards to the mass protests and popular revolts, today the states of the Arab World can be categorized into five groupings or categories. These categories are the following:

The Typologies of Benefit
Taking into account U.S., E.U., and Israeli foreign policy these protests and revolts can also categorized within two different typologies. The latter can be used to explain the reactions of the U.S., the E.U., and Tel Aviv and their respective mainstream media coverage of these events.

It should, however, also be cautioned that the outcomes of these protests and revolts are unpredictable. The behaviour of Washington and Brussels suggest that they want to cash in on projected outcomes to reinforce their geo-political influence. Both the U.S. and the E.U. seek to"manage democratization" in the Arab World to thier benefit.

The “agency of the Arab people,” namely the grassroots, which the U.S. and its allies underestimate, has a significant role to play in these events. It is this process of an unfolding mass movement that makes these revolts unpredictable. Coupled with pan-Arabism, a potent force is arising.

The Arab people ultimately constitute a major challenge to Washington and its cohorts.
Unlike in Eastern Europe during the colour revolutions, the Arab regimes are supported by Washington. The Arab people are aware of U.S. and E.U. double-standards. Arabs know full well that the U.S. and its E.U. allies are not the vanguards of democracy and liberty.

In regards to Israel, Tel Aviv sees instability and chaos in the Arab World as serving its interests. Israel is not cutting itself off from the events in Arabdom. The Israeli strategy, in seamless alignment with both the U.S. and the older British strategies in the Middle East-North Africa (MENA) region, has always been to weaken and divide the Arab states. Israel has supported balkanization in the MENA region wherever it can. The Yinon Plan is very much alive today in what can henceforth be called the “Yinon Approach.” The strategy is named after Oded Yinon, a Israeli foreign policy analyst who outlined the “Zionist strategy” for breaking up and balkanizing the Arab World. [1]

The plan operates on two essential premises. To survive, Israel must (1) become an imperial regional power, and (2) must effect the division of the whole area into small states by the dissolution of all existing Arab states. Small here will depend on the ethnic or sectarian composition of each state. Consequently, the Zionist hope is that sectarian-based states become Israeli satellites and, ironically, its source of moral legitimation.

Read More
Posted by NO Base Stories of Korea at 8:11 AM