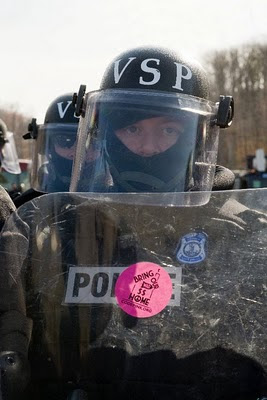 The governator of Maine took down the mural from the Department of Labor office sometime over the weekend. Was probably during the dark of night. He has hidden it and won't disclose the location. Even the artist of the mural had no idea her work was being removed nor does she know what was done with it. The Union of Maine Visual Artists is planning a news conference on Friday in the state capital Hall of Flags to demand the return of the mural and have invited me to speak on behalf of the Bring Our War $$ Home campaign. Things will start at noon.

The latest faux pas from the governator was his statement about prisoners in the Maine jail system getting "health care and some education" while old ladies go without. “If it were up to me, I’d find a dungeon very cheaply and house them all," he grunted as his divide the public against one another strategy continues to play out.

It gave up transportation of a man’s body found in Okuma-town, Fukushima prefecture within 10km from Fukushima No.1 nuclear power plant. The body showed such a high level radioactive contamination that there is no way to carry it. There is possibility that more bodies are left in this 10km area. The agency says it has to plan “a measure to counter this”. The agency says the man's body was found by the Fukushima Prefectural Riot Police men and others who had been informed of it, in the open lot of a workshop 5 to 6 km from the nuclear plant.

The surface of the body counted radioactivity level of “over 100,000 CPM (count per minute) ” for which a whole body decontamination is required. There is possibility that while carrying it, the body will contaminate the men at work. The agency gave up moving the body because it will contaminate the recipients and the surroundings, too. The body is contained in a sack and laid in the nearby building for the time being.

Washington Post reports: The military intervention in Libya has cost the United States “about $550 million” in extra spending so far, a Defense Department spokeswoman said Tuesday, providing the first official estimate of the mission’s price tag. Almost 60 percent of the total cost has been for munitions — the most expensive of which are Tomahawk missiles, which cost more than $1 million each to replace.
Posted by NO Base Stories of Korea at 8:49 AM