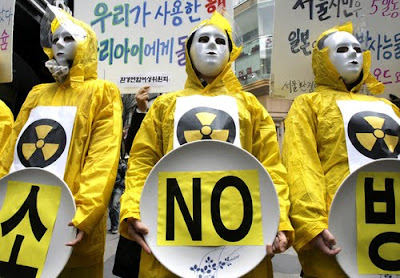 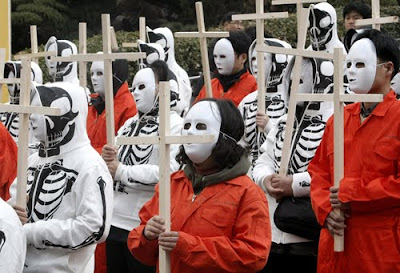 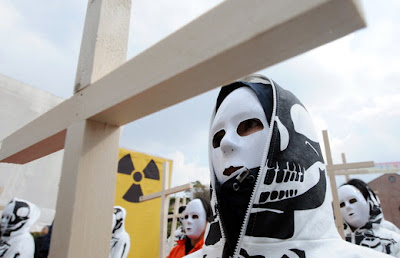 Marking 32nd anniversary of the Three Mile Island nuclear accident---"Stop nuclear power plant." Environmentalists such as activists at the Coalition of the Environmental Movement stage a performance in front of Myungdong Cathedral, downtown Seoul demanding the Lee government to repeal the nuclear power - centered energy policy on March 28, 2011. The nuclear accident in Japan seems to have raised the level of sense of unease around the world.
Photo by Seo Sung-il/ Caption by Seol Wontai


It has emerged that radioactive iodine and cesium released from Japan's Fukushima nuclear plant have traveled on the wind and been spread all over Korea.

Although the amounts of the substances detected have been minute, their combination with the Korean government's belated response is increasing the Korean people's sense of unease.

At a briefing on March 29, Korea Institute of Nuclear Safety (KINS) president Yun Choul-ho stated that "the result of analyses of air samples gathered at all of Korea's 12 radioactivity measuring stations on March 28 showed minute amounts of radioactive iodine to be present at each station."

Levels of radioactive iodine detected ranged from 0.049mBq/m3 (millibecquerels) to 0.356 mBq/m3. In terms of exposure of the human body to radioactivity, this is equivalent to between 1/200,000th and 1/30,000th of the annual maximum dose of 1mSv (millisievert).

At one of Korea's measuring stations, in Chuncheon, cesium was detected in addition to radioactive iodine. The radioactive exposure represented by this amount of cesium, too, was equivalent to around 1/80,000th of the annual maximum dose of 1mSv.

"There is no need to link these discoveries to any possible risk to human health, in as much as they are minute quantities," said Yun.

KINS, however, has incurred distrust for its "belated response," including only starting nationwide radioactivity measurements two weeks after the Fukushima accident, despite the anticipated influx of radioactive substances, and delaying announcement of the fact that such substances had been detected.

The Korea Meteorological Association has also changed its stance, having previously just repeated that "westerly winds mean Korea is the safest country [from Japanese radiation] in the world."

President Lee Myung-bak said at a cabinet meeting on the same day that "Examination results must be made public swiftly and transparently in order to bring the people peace of mind. When it comes to amounts [of radioactivity] detected, experts must explain them to the people in an easily comprehensible manner and use specific illustrations."

Japanese prime minister Naoto Kan, meanwhile, at an upper house budget committee meeting on the same day, said that "the unpredictable emergency situation at Fukushima No. 1 nuclear plant continues. We will respond to it with the greatest urgency." (General News, Major story on the front page. The Kyunghyang Daily News. March 30, 2011)

http://english.hani.co.kr/arti/english_edition/e_national/470621.html
No More Fukushima: a poem for Yuko TsushimaMarch 30, 2011
Posted by NO Base Stories of Korea at 8:43 AM