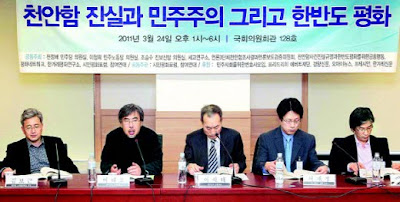 The Hankyoreh Peace Institute, People’s Solidarity for Participatory Democracy, and the Three Press Groups‘ Verification Committee of the Results of the Cheonan Investigation host an event on the anniversary of the sinking of the Cheonan entitled, “Cheonan Truth and Democracy, and Peace on the Korean Peninsula,” at the National Assembly, Mar. 24. (Photo by Tak Ki-hyung)

Hankyoreh
Following Cheonan friction, S.Korea at a diplomatic crossroads
:Seoul must decide whether to adhere to its hardline position or join the international shift towards dialogue
By Yi Yong-in, Staff Writer
March 25, 2011

The year 2010 began with a timid thaw following the frosty political situation on the Korean Peninsula resulting from North Korea’s 2009 missile launch and nuclear test. In late March of that year, Pyongyang and Washington made secret arrangements for a visit to the U.S. by North Korean First Deputy Foreign Minister Kim Kye-gwan. D-Day was to be mid-April. Just as the two countries were about to finalize the agreement, the Cheonan went down on Mar. 26.
With the sinking, the situation on the peninsula went into zero visibility conditions, where everything was unpredictable. Conflict deepened between Seoul and Beijing, and a clash of power arose between Washington and Beijing. In November, Yeonpyeong Island saw the first artillery attack since the end of the Korean War. The Cheonan sinking sat at the starting point of the heightening of peninsular tensions that led to an artillery exchange between North Korea and South Korea.

The Cheonan sinking brought a reprise of friction between Cold War-era camps to Northeast Asia. To begin with, South Korea, the United States, and Japan on one side and North Korea, China, and Russia on the other offered conflicting determinations as to the cause of the sinking. South Korea’s Joint Investigation Group (JIG) announced that the vessel had gone down due to a North Korean torpedo attack. After an initial silence, Washington began actively involving itself in the investigation in late April and assisted with the South Korean government’s announcement.

North Korea, in contrast, strenuously denied its involvement, and China aligned itself along with this. A government source familiar with the Cheonan investigation process recounted, “The Chinese military determined that it was not a North Korean attack based on its own intelligence, and this determination was passed on to the highest leadership level.” Russia, which dispatched its own investigation team to South Korea, concluded that the so-called “No. 1 torpedo” was “merely torpedo debris, and [the Cheonan’s sinking] is presumed to be due to a mine explosion.”
Also the subject of sharp clashing was the strategic political response to and use of the Cheonan incident. For the Barack Obama administration, which had been facing turbulence with the Yukio Hatoyama administration in Japan over the potential removal of a U.S. armed forces base on Okinawa, the Cheonan situation provided a way through the problem. Visiting Japan on May 22, U.S. Secretary of State Hillary Rodham Clinton recalled the Cheonan, saying that the threat to South Korea was also a threat to Japan. The next day, Hatoyama announced that he was effectively scrapping plans to relocate the USFJ base.

Beijing protested. In particular, it vehemently criticized the U.S.’s introduction of its nuclear-powered aircraft carrier USS George Washington in the West Sea during joint exercises with the South Korean military, and expressed strong suspicions that the U.S. was training to block the Taiwan Strait in the event of an emergency. Distrust and friction built up between Washington and Beijing, and between Seoul and Beijing.

In the process, North Korea and South Korea lost the power to guide the political situation. Seoul announced the “May 24 measures” in response to the Cheonan sinking, which halted all trade and exchange with North Korea except for the Kaesong Industrial Complex. It also engaged in a large-scale naval show of force with the U.S.

One year later, the peninsula finds itself at a crossroads. After carrying on an intense battle of wills for around one year, Washington and Beijing declared a “strategic partnership” at a Jan. 19 summit meeting. The U.S. cautiously began to look for ways to get dialogue going with Pyongyang via the resumption of food aid to North Korea.

With the countries surrounding the peninsula apparently having changed course toward negotiation, the Lee Myung-bak administration is now facing a fork in the road. Will it join in the larger trend, even if it means skirting the Cheonan issue at the risk of protests from domestic North Korea hard-liners, or will it carry on holding out against pressure from the international community to improve its relations with Pyongyang? Analysts say that this choice will determine whether the peninsula proceeds toward peace and stability or conflict and friction.
Please direct questions or comments to [englishhani@hani.co.kr]
____________________________________
See also 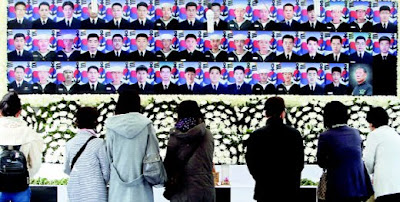 Citizens present flowers at the group memorial for sailors in the week leading up to the one-year anniversary of the sinking of the Cheonan, Mar. 24. (Photo by Rhee Jong-chan)

“The investigation findings stating that the Cheonan sank due to a CHT-02D torpedo fired by North Korea are a patently confirmed truth, and it is unfortunate that there are some people who are unable to believe this truth.” This has frequent statement from military authorities has continued recently as the one-year anniversary of the sinking of the Cheonan approaches.

READ MORE
Posted by NO Base Stories of Korea at 7:51 AM