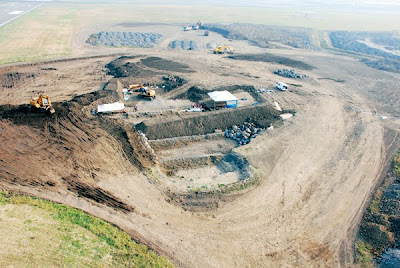 ▲ An estimated 700 people were executed at the present site of Jeju International Airport, and though there was a full-scale excavation during 2007, the remains of only 237 bodies were found. Photo courtesy Jeju 4.3 Peace Foundation
Jeju Weekly
Bloody history buried under Jeju International Airport Some mass graves of April 3 victims still unexcavated
Saturday, March, 26, 2011, 17:59:18
Koh Yu Kyung

While the airport is now a busy tourist intersection filled with animated footsteps, it has not always been the case. In fact, a tragic history is hidden beneath its lively exterior.

“The crack of gunshot continued at the airfield all day long,” reminisced Kim Eui Hyup, whom I interviewed last summer.

Kim was 11 years-old when he witnessed the massacre at the airport. He was ordered to dig air-raid shelters at the current spot of Jeju International Airport. One day while he was working, trucks filled with hundreds of people entered the airfield. Soldiers sent by the government dragged people out of the trucks and started to shoot them. Dead bodies were ruthlessly thrown into big holes. Kim saw this horrific scene from over a fence.

“About 60 years have passed since then, but I still remember it vividly,” Kim said with a sigh.

What he experienced was a part of Jeju’s unresolved past, the infamous April 3 Massacre. Estimates vary, but approximately 30,000 Jeju people, many falsely accused of being communists, died during the incident. Jeju airfield, which has since developed into the current Jeju International Airport, was a significant execution spot where hundreds of people were killed; many of their bodies are still buried under the runway of the airport.

Unfortunately, this is not a well-known fact. The airport now stands as if nothing had happened, and people walk around it totally unaware of the sad history buried under their feet. Even the inception of Jeju airfield was based upon a depressing history of the island. Dating back to the Japanese colonial period, the airfield was built originally as a military base for the occupiers by the hands of exploited Jeju people. After the Japanese withdrew from Korea, it was taken over by the U.S. military. However, the airfield was not used by U.S forces, making it a perfect place to carry out a mass-death sentence.

There were two major events that caused the massacres at the airport: the infamous court martial and the preventive custody measure. The court martial refers to special judicial procedures that deal with crimes under military criminal law or other punishment legislation. In other words, the trials for those who violated military law are held by the military, not by a civil court. During the Jeju April 3 Massacre, two courts martial were held, on December 1948 and on July 1949. Most people who were brought to trial were executed.

Among the accused were some who had started unrest on April 3rd, but most of them were innocent civilians who escaped to the mountain to avoid retribution. Furthermore, trials were not properly held; the records of lawsuits, including the sentencing, do not exist, and the accused themselves were not aware of whether they had stood trial. Trials during the April 3 Massacre cannot be called legal. Hence, on March 14, 2007, the Korean government defined all 868 convicts executed by the courts martial as victims.

According to records of The United States Military Advisory Group to the Republic of Korea, Jeju airfield was where on Oct. 2, 1949 a mass-execution of 249 people was performed. The preventive custody measure, another event that caused mass murder at the airport, is a type of imprisonment used to confine people who are likely to commit a crime. During the April 3 Massacre, only the military had authority to hold people under preventive custody. Since this act confined people who did not commit crimes, many innocent Jeju citizens were unfairly arrested.

According to official police documents, a total of 820 people were confined due to the preventive custody order, and executions of prisoners were carried out over two separate dates: Aug. 4 and 19, 1950.

READ MORE
Posted by NO Base Stories of Korea at 8:51 AM