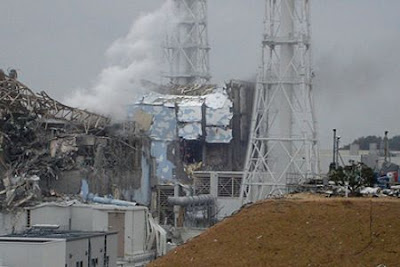 Three workers at reactor 3 of Japan's Fukushima Prefecture have been taken to hospital for radiation, while the nuclear crisis keeps high the life-threatening concerns of the disaster.

Japan's nuclear safety agency said the workers of the Fukushima Daiichi plant were hospitalized after being exposed to radiation, AFP reported Thursday.

March 11 witnessed an extremely fatal earthquake followed by a gigantic tsunami in northeastern Japan, while so far at least 26,000 people have died or are presumed dead according to the National Police Agency.

The National Police Agency said on Thursday that 9,700 people have so far been killed and over 16,500 more are presumably dead.

There are fears of a much higher death toll from the disaster that has displaced hundreds of thousands of Japanese.

The mega-quake has also affected the presumably quake-proof Fukushima nuclear plant. Efforts are underway to cool down overheating reactors at the plant.

The Japanese government has ordered the evacuation of about 200,000 people living in a 20-kilometer (12.4-mile) area around the nuclear power plant, and told people living between 20 kilometers and 30 kilometers (18.6 miles) from the plant to remain indoors.

The 9.0-magnitude earthquake, off the northeast coast of Japan's main island, unleashed a 30-foot (10-meter) tsunami wave and was followed by more than 50 aftershocks for hours.

The quake is now considered Japan's deadliest natural disaster since the 1923 Great Kanto Earthquake, which claimed the lives of more than 142,000 people.
Posted by NO Base Stories of Korea at 8:35 AM