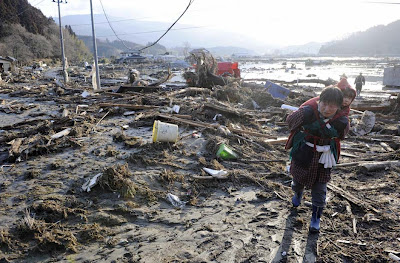 It was found that three people arbitrarily chosen out of 90 people who were waiting for a rescue helicopter to come on the school ground within 10 km-radious from the plant where the explosion happened are positive with high radioactivity. They are fine but need the whole cleansing of the body.

It is advised that if you live within 20 km-radious from the plant, you throw away your clothes after entering into a room, house, facility, from the outside, especially so if the clothes get wet in the rain.

One of the staff, who got down due to the explosion while doing his utmost to stop the situation from further worsening, died in the hospital in the evening. Details on his death have not been disclosed.

Quakes are still happening, spreading into nearby places. Someone calculated that radioactivity will reach Tokyo tomorrow night. A big oil complex in Sendai has been on fire since the quake in the evening today, following the gas complex still on fire since yesterday.

We don't know how to stop this ongoing energy--nuclear, gas, oil-complex disasters. To me, it is as if Obama's love of ' energy' and ' infrastructure' has been backfired here in Japan, as some Japanese accomplices have made this country greedy, seeking energy abroad.

All the leading politicians, whether conservative or progressive, must have been informed of this probable situation as to Fukushima No.1 & 2 plants already last night, a conviction I gained from still another source. Our Diet (Parliament) should be moved to somewhere near a nuclear power plant.

But in the meantime, the older nuclear power plant in Shizuoka which stands on an active fault would be another threat, especially to Tokyoites.

Makiko Sato
Posted by NO Base Stories of Korea at 7:16 AM