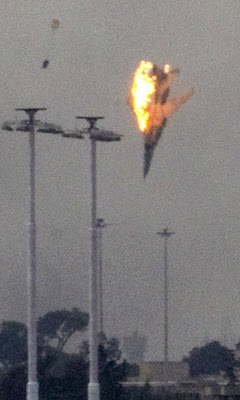 Emergency ejection for the pilot whose plane was hit. A pilot was ejected from the plane which was hit by the anti-air fires during the West's attacks on Libya's pro-Gadhafi forces. Although the international community embarked on attacks against Libya, the Korean government will not issue any welcoming statement in favor of the attacks. (Photo by AP, Yonhap News from Benghazi, Libya.)

As the Western multinational forces launced an attack on Libya, the issue of evacuating Korean residents in Libya has loomed as an urgent problem.

Some analysts say that the Korean government has now confronted an awkward situation, given that it has ridden a tight rope between the voices of the international community and the government of Gadhafi.

The Korean government had a meeting between relevant ministries and determined to continue advising the 118 remaining Korean workers such as employees at construction companies and self-employed people to leave Libya.

Also, it prepared for a contingent situation by mooring the Choi Young of the Chunghae Unit to the north of the Suez Canal, which was on her way back to the Gulf of Aden after having completed the mission of evacuating Korean residents.

An official at the Foreign Ministry said "The government is now recommending the whole of remaining 118 Korean residents to evacuate, but the construction companies insist on stationing their workers still there by arguing that previously they had protected their interests by remaining to the last."

However, given that the attacks launched by the Western countries are in part purported to intensify sanctions on Muammar Gadhafi's government, business prospects for Korean firms have also become unclear.

The Korean government does not plan to issue any welcoming statement in connection with the UN resolution No. 1973, which includes establishment of no-fly zones, freezing of assets, and arms embargo.

An unnamed Foreign Ministry official said, "Considering that the attacks launched this time are a limited battle, excluding sending in of ground troops and that the US des not stand in the vanguard, the US will not request Korean soldiers' participation in their military action."

As the international community embarked on a punishment of the Gadhafi regime, National Assemblyman Lee Sang-deug has fallen into an awkward situation, who led the so-called 'shuttle Libya diplomacy' last year to alleviate the coarsened bilateral relations.