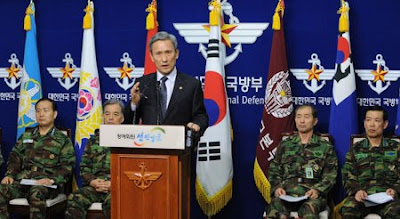 Defense Minister Kim Gwan-jin gives an explanation on tasks for national defense reform at the Ministry of National Defense on March 8, 2011. Although there arose some objections from mostly reservists, defense reform is a task urgently demanded by the times we live in.

It has been put off for at least 20 years, and if Koreans fail to do it now, Korea's military simply cannot be renewed, analysts pointed out. The Ministry of National Defense must expand support for defense reform among the actively serving military and also respond resolutely to those who oppose reform out of self-serving purposes.
File photo by the Kyunghyang Daily News
Caption by Seol Wontai, Editor of the Online English Edition
_____________________________________________


Strong objections are being raised in and outside the military as the passing of the national defense reform bill approaches. Objections from those in active service, most of all from reservists, are of a sufficient level that Cheongwadae (the office of the president) yesterday warned of personnel replacements.

In a situation where national security has entered a critical phase, the impeding of defense reform by those in active service must be regarded as a form of "disobeying of orders" that is hard to condone.

There are two main objections to the so-called "Defense Reform Plan 307," which was decided upon by the Ministry of National Defense (MND) early this month.

The first is that if the plan grants some powers regarding personnel appointment and military supplies to the Joint Chiefs of Staff, this will lead to a concentration of power within the military and contravene the principle of civilian control of it.

This is a logic that has been advocated by the navy and air force since 1988, when the government of President Roh Tae-woo came up with the "long-term national defense preparation development forecast" (the "8.18 Plan"), which essentially pushed for a unified military.

Given that at that time the dark shadow of military coup still lingered, there was some reason behind this logic. Another criticism is that it is inappropriate to reorganize the command structure in the higher echelons of the military at a time when big changes to the security environment on the Korean Peninsula are in progress, including the predicted transfer of power in North Korea next year.

Such criticisms, however, avoid the problems with our military that were revealed by the Cheonan sinking and Yeonpyeong Island incidents. The military showed a lack of coordination, even appearing flustered, both in terms of gathering and processing intelligence before the events, and in terms of reporting and responding afterwards.

The MND has come up with "Plan 307" in order to remedy these problems. Questioning the appropriateness of its timing is, itself, inappropriate.

Given this, it would seem valid to regard objections to defense reform as related to the possibility of tyranny on the part of the army among military services, and to the plan to reduce the number of generals.

If a chairman of the Joint Chiefs of Staff with an army background is also the head of a unified military headquarters, this could lead to a relative weakening of the navy and air force. And it is a fact that being promoted will become harder for officers if the number of generals drops from 440 to 380 by 2020.

The military's dissatisfaction is understandable. The problem is that, from the point of view of the ordinary Korean people, the military's objections appear to be made out of self-interest. The military must be aware of this.

Defense reform is a task demanded by the times we live in. It has been put off for at least 20 years, and if we fail to do it now, Korea's military simply cannot be renewed. The MND, while continuously increasing support for defense reform among the actively serving military, must respond resolutely to those who reject reform.

It goes without saying that the full support of Cheongwadae is needed here. Reservist groups such as the "Seonguhoe," association of generals, and other groups must also break free from their outdated logic, look at defense reform from a national perspective, and support it. (Editorial, The Kyunghyang Daily News. March 30, 2011)
Posted by NO Base Stories of Korea at 9:10 AM