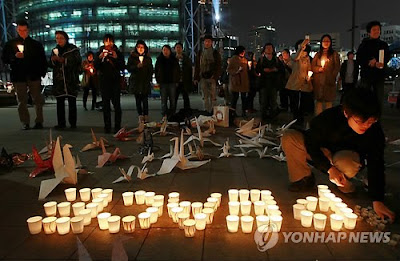 On March 28, the Hankyoreh and civic organizations in Korea had an evening event for condolence and solidarity for Japan being in the crisis of nuclear plant explosion in Fukushima, at the Boshingak, Seoul (7pm) 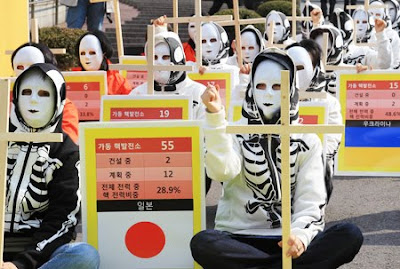 Joint declaration for recovering Japanese earthquake·nuclear accident, and for society safe from Nuclear

Today, we are here, feeling miserable and tragic. The massive earthquake which hit Japan on the last 11th totally changed the lives of Japanese citizens. Official casualties and missing people have reached as many as 20,000 and approximately 400,000 people evacuated their home and are suffering from anxiety in the temporary shelter. We would like to express our condolence to those Japanese who have passed away and are still suffering from the natural disaster. Apart from the problems regarding the past history, we feel sincerely sorry for our neighboring country Japan with which we have a lot of economic and cultural exchanges. Not only the enormous damage caused by the earthquake and tsunami, the explosion accident of Fukushima Nuclear Power Plant is also another disaster indeed. As radiation-contaminated materials are spreading even currently, the fear that this accident might develop into an huge nuclear disaster is increasing. We wish this Fukushima Nuclear Power Plant explosions come to settlement as soon as possible so this accident does not have any negative influence on the entire humanity and the nature as well as Japanese citizens. Therefore, Korean civil social groups and parties are planning an aid program for the Japanese earthquake and the nuclear accident. Though our help might be minute, in comparison to the huge scale of the damage, we believe that it would be of a great help if all nations including us cooperate in order to help Japan to overcome the tragic accident. In addition to this, we have also realized the importance of constructing a safety net from the nuclear power. This is because even though natural disasters such as earth quakes are unpredictable and unavoidable, we are able to prevent following explosion of nuclear facilities. Japan has more than twice as many nuclear plants as Korea. However, the number of nuclear plants per unit area is larger in Korea. Moreover, we cannot rule out the possibility that similar disaster recurs in Korea and thus, a shift of the nuclear-oriented energy policy is urgently required. Today, we, civil social groups and parties, declare that we will take wide and diverse joint actions in order to build safe society from nuclear power and to support Japanese people suffering from the earthquake and the nuclear plant explosion. Furthermore, we encourage all Korean citizens to share Japanese people’s sorrow and call upon the shift of a nuclear development policy so this disaster is not to be repeated. Beginning from this declaration, we, civil society, religion groups, and parties, proclaim Joint Action Period for supporting victims of Japanese earthquake and the nuclear accident and for the shift of nuclear development policy, from 28th March, the day of Three Mile Island Nuclear accident to 46th April, the day of Chernobyl accident. As a first action, a memorial event for commemorating the victims and supporting rapid restoration will be held at 7pm, 28th March, the first day of Joint Action Period with the citizens. During this period, joint civil social groups and the press is going to organize a charity fund-raising campaign. Secondly, we will take actions promoting a shift of nuclear plant-expanding policy and security inspection on nuclear generating stations. Though current government is conducting security scrutiny over nuclear plants with civilians, the examination and inspection is highly likely to be unfair since it only includes personnel who would like to maintain or expand nuclear generating stations. Only can this be impartial when civil social groups are included. We call for Joint Civil Inspections. As seen from the disaster in Japan, there is no such a thing as completely safe nuclear plants. Thus, in order to build society free from nuclear disaster, we will lead activities urging government to reexamine nuclear-expanding policy with other parties. Not only this, we will take actions against nuclear-development and -expansion policy with those who are living in the area where nuclear plants are under operation and in candidate areas for new nuclear plants. Civil society of Korean and Japan will cooperate and implement various measures in order to stop the competition of the nuclear power development, and carry out activities to march toward a society without nuclear power. Thirdly, we will organize campaign alerting citizens to notify how dangerous nuclear power is and how closely intertwined it is with our daily lives. In addition to this, we will also implement programs informing emergency behavioral instructions for possible nuclear disaster. Through these actions, we will, with our citizens, make society safe from nuclear power. March 22, 2011. Joint action for supporting victims of Japanese earthquake·nuclear accident, and for shift of nuclear development policy (사)에너지나눔과평화, YWCA, 경주핵안전연대, 기독교환경운동연대, 나눔문화, 녹색교육센터, 녹색교통운동, 녹색연합, 다함께, 문화연대, 민주노동당, 민주당, 민주사회를위한변호사모임, 민주언론시민연합, 보건의료단체연합, 부안시민발전소, 사회당, 사회진보연대, 삼척핵발전소유치백지화위원회, 생명살림연구소, 생태지평, 시민사회단체연대회의, 시민평화포럼, 에너지기후정책연구소, 에너지전환, 에너지정의행동, 여성민우회, 여성환경연대, 영광군농민회, 영덕핵발전소반대 500인결사, 전국민주노동조합총연맹, 전국철거민연합중앙협의회, 진보신당, 참교육학부모회, 참여연대, 초록교육연대, 카톨릭환경연대, 평화네트워크, 한국노동조합총연맹, 한국미래연대, 한국진보연대, 한국YMCA전국연맹, 핵으로부터안전하게살고싶은 울진사람들(핵안사), 환경과공해연구회, 환경을 생각하는 교사모임, 환경재단, 환경운동연합, 환경정의. KYC

S.Korea to rank 1st in nuclear plant density by 2024

:Some say the Lee administration’s plans for 34 plants by 2024 are without public consensus

Posted by NO Base Stories of Korea at 8:25 AM