Text Fwd: BUILD IT AND THEY WILL COME 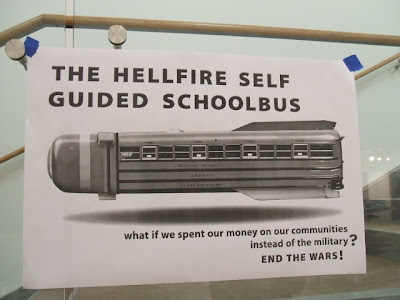 Organizing Notes
Tuesday, March 22, 2011
BUILD IT AND THEY WILL COME

Last night I attended a public meeting at my city hall that was called by the politicians who represent this area in the state legislature. They wanted public input on how they should react to the governor's proposed cutbacks in the state budget. The cutbacks will largely fall on public education and social programs. The governor wants to give tax cuts for those at the top. About 50 people from surrounding towns turned out.

While in Washington DC I had received an email from one of the legislators inviting the public to the meeting so I forwarded it around to a couple key people. Five members from the Bring Our War $$ Home campaign showed up and each of us stood up during the meeting and made statements. I also passed out flyers to everyone about our upcoming April 4 rally inside the state capital.

As usual the politicians were cold and made no comments about what we had to say about cutting war spending as one way to deal with our fiscal crisis here in Maine. As it turns out Maine's share of war spending since 2001 is now $3.4 billion - the same amount that our state will spend this year. One of our supporters last night told the state officials that our congressional Rep. Chellie Pingree in Washington was trying to bring our war $$ home and that she could use some help. (Last Thursday she voted for the Kucinich resolution in the House of Representatives that called for a withdrawal from Afghanistan. It lost badly.) This did not seem to phase them one bit.

But these politicians were not our real target. The people we were actually trying to reach were the 50 people sitting in the hearing - the taxpaying citizens who are having everything dumped on their shoulders by the corporate oligarchy.

As I was walking out to my car after the meeting was over I joked with an older couple, who I had never seen before, that our latest snow storm was not a good sign of spring. They laughed and then the woman said to me in her strong Maine accent, "We'll see ya in Augusta on April 4."

This was a wonderful gift as this woman was letting us know that she truly heard our appeals in the meeting to connect the dots between endless war spending and fiscal collapse at home.

The superintendent of schools, who I had met with last year to explain the campaign, also shook my hand and thanked me for being there before I left city hall. The former chief of police in Bath, who was there to speak against cutting treatment programs for drug addicts, did the same.

It feels good to know that our message seems to be breaking through the ice. Build it and they will come.
Posted by NO Base Stories of Korea at 8:11 AM