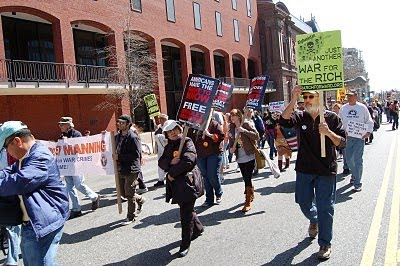 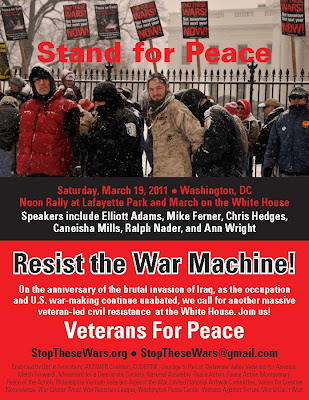 There were about 1,500 people at the Veterans for Peace protest at the White House yesterday. (More than 100 local protests were held yesterday across the nation.) Following the rally in Lafayette park we marched nearly one mile in a big circle through the streets and ended back up in front of the White House. We quickly climbed onto the fence and waited for the park police to give us our warnings before they started to make the arrests.

These photos are by Peter Woodruff, who was also arrested, and in all there were 113 of us put on buses and driven to the park police headquarters where we were processed in record time and released.

Fellow Mainers Mark Roman and Lisa Savage were arrested and University of Maine-Farmington students Nicole Moreau and Jade Forester were there to cheer us on.

I'll write more later about the day - need to get packed and head to train station for the return trip home.

The Washington Post coverage amounted to a photo of a person's two feet standing next to two empty combat boots with flowers in them. The caption reads: Boots belonging to a soldier who was killed in action were on display Saturday as anti-war protesters rallied in front of the White House to mark the 8th anniversary of the U.S. invasion of Iraq.

And that is all they wrote. The "free press" in action.

Correction: We later discovered that the Post in fact did have an article about the protest in another part of the paper. See it here
Posted by NO Base Stories of Korea at 8:42 AM