[Jeju Update] Opposition parties demand to stop the naval base construction/ Extended naval base in Hwasoon?

The four representatives of the opposition party members demanded the Island governor’s cancellation of ‘approval on the annulment of absolute preservation areas’ with his direct authority, as even the Island council had made a March 15 reversing resolution in which they cancelled the ex-Island council’s agreement bill on the annulment of the absolute preservation areas in the Gangjeong village in Dec. 2009.

The four warned the central government and navy to stop their unilateral construction that has increased conflicts among the Island people, saying that ‘the justification on the enforcement of the naval base’ has disappeared with the Island council’s reversing resolution on March 15, 2011. 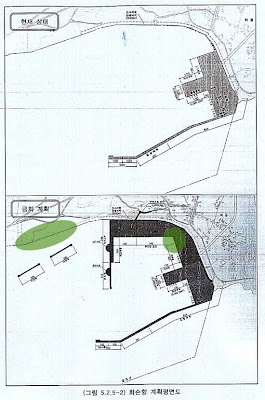 Above: current/ bottom: plan (* The green areas would be for reclamation)
The Seogwipo Daily News reported on March 24 that the central government is planning to enlarge current Hwasoon harbor for a maritime police dock. Hwasoon was the 2st candidate area for the naval base but withdrawn due to the residents’ strong opposition against naval base plan there for five years. The Island people have long suspected that the naval base construction would not end in the Gangjeong village but would extend into the nearby areas such as Hwasoon and Moseulpo, which is 40 minutes car distance from Gangjeong. Hwasoon and Moseulpo have been used by the Japanese imperial military during the WW II to hit China. According to the article:
‘The Ministry of Land & Maritime, establishing its third nationwide bay & harbor plan, is in process of public-opened plans in each area from March 16 to April 7. Among them, the case of Hwasoon harbor, with the plan of over-sized reclamation there is bringing concern that it would make worse of the coastal erosion not to mention of its sand coast.
According to the Ministry of Land and Maritime, the newly reclaimed area size of the adjacent water areas would be 118,827 ㎡ that would be 30times larger than the current size of 3,882 ㎡
The specific are:
maritime police dock: 31,735 ㎡ (scale 380m)
Lighters’ wharf: 30,000 ㎡(200m)
Seawall shore protection: 2,728㎡(340m)
Seawall: 3,272㎡(310m)
Seawall parallel to coast: 400m
Shore protection for the area of bay &harbor facilities: 51,092㎡(345m)
New entry pavement road: 2,000 ㎡’
___________________________________________
People visit the Gangjeong village. Photos with the members of the Life and Peace Fellowship and Frontiers. 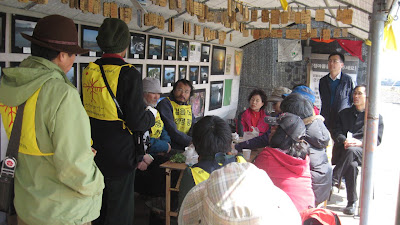 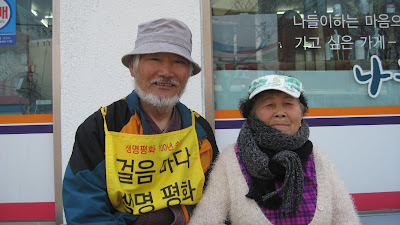 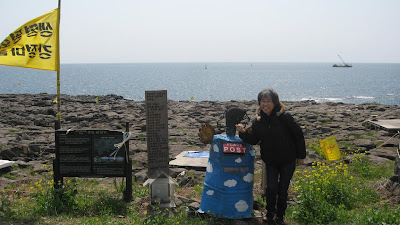 Posted by NO Base Stories of Korea at 9:27 AM