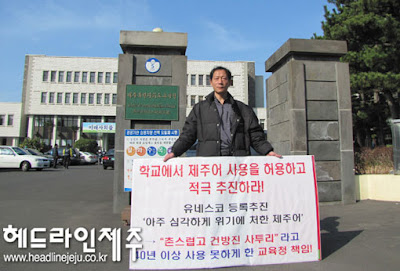 Here in the Jeju Island, the faced situation could be similar to a lesser degree if not the same with the examples in the other regions, especially in those Islands who have been suffering under the imperial eyes and tongues.

The Headline Jeju on Feb. 25 reported an interesting article ( by Yoon Chul-Soo) which was about one man protest by Kim Young-Bo, a high school teacher teaching commerce, who demanded the free use of the Jeju dialect in schools in front of the Jeju Special Self-Governing Provincial Office of Education (The Jeju Provincial Office of Education, afterwards) in the afternoon of Feb. 25, 2011.

Below is the translation of his words cited in the article:

“The Jeju Provincial Office of Education who has not allowed the free use of the Jeju dialect is very responsible for the Jeju language being critically endangered. Even though the situation is very serious as to the degree that it is registered as a critically endangered language by the UNESCO, the Provincial Office of the Education is not trying to fix such wrong education policy.”

It was poignant to hear that the Jeju dialect is critically endangered itself while the UNESCO designated soft corals in the Gangjeong Sea is being threatened with the naval base construction in the Gangjeong village, as well. (* About the UNESCO registered Jeju language, see HERE and HERE)

Here are further translations of his cited words, as well:

"I am more infuriated by the fact that no one really seriously concerns about that, except for short time whenever there were media reports on the Jeju dialect being registered as a critically endangered language. Who would succeed the Jeju language if the current halmang(s)(old women) and harbang(s)(old men) die. The language might disappear.”

According to the article, the duality is the very point that motivated him toward his own one man protest.

What is interesting about the event and article is that those things very remind the current situation of the Jeju Island whose native cultures are being disappeared with corporate and militarism culture in South Korea, especially with the law on the Jeju Special Self-Governing Province, which was brought in 2006 with the concept of Jeju free international city and emphasis on the so-called’ ‘globalization.’

Mr. Go Gwon-Il, a Gangjeong villager thinks the Central and Island governments’ current mobilizations for the Jeju to be one of the new seven wonders even being mobilized with many celebrities along with excessive international propaganda is part of such extended move.

According to him, the Jeju Island should NOT be one of the new seven wonders because it would make worse the situation of the Jeju Island, the UNESCO triple-crowned site(Mount Halla’s Biosphere Reserve recognition in 2002; Natural Heritage Sites designation of Mount Halla, Seongsan Sunrise Peak and Manjanggul cave in 2007; and the geopark designation in 2010) with increasing capitalism and reckless tourism.

Otherwise, according to the Wiki on the Jeju dialect:

One large difference between the Jeju dialect and those of mainland Korea is the lack of formality and deference to elders. For example, while a speaker of the Seoul dialect might say 안녕하세요 annyeonghaseyo ("Hello") to an older person, a speaker of the Jeju dialect would say 반갑수다 ban-gapsuda (lit., "Nice chatting" or "Nice talking"; roughly equivalent to "Howdy"). To many mainlanders, a child saying this to an adult would be appalling, but on the islands, a more "egalitarian" form of speech is used, perhaps a cultural idiosyncrasy that has hung on after the incorporation of Jeju itself (under the Tamna kingdom, which, though having subjugated itself to Korean states since the 7th century, was not brought under the full centralized control of a Korean state until 1404) into Korea.

There was also an interesting article in the Jeju Weekly. See HERE. According to it:

Looking at the wider linguistic picture, the Korean language is also losing ground on account of the dominance of English.

But looking at the problem more closely, one sees that much of the Jeju dialect is disappearing fast, partly because the capitalistic logic of “efficiency” has been an excuse for our indifferent attitude. During the rapid economic development in Korea which started in the 1960’s, preservation of cultural diversity was considered “inefficient” since it could deter fast decision making. This has since put the Jeju dialect on the list of critically endangered languages.

For reference, the 60’s developmentalism was promoted by the Park Jung-Hee military dictatorship who has eyed on the Jeju Island, a historically strategic point by the imperial countries and dominating class, with the turned-out-to-be a failed military base plan then.

The concern about the possibility of disappearing vernacular terms in the Gangjeong village is being faced with the rapidly accelerated naval base construction: Who would remember the names of Goorumbee(cloud-shaped rocks stuck under the earth), Gaegurumbee (cloud-shaped rocks on the earth), Jinsokkak, (hem-look in the place of deep and and inwardly long water), Neobeunnyo (spacious rock protruded over water), Metboori( * Of which the meaning is not exactly known but according to Mr. Go Gwon-Il in the Gangjeong village, it could be ‘a ritual place offered with rice’) in the Joongduk coast and Natgakk(hem-look in the place of stream) in the downstream of the Gangjeong stream, once all the rocky Joongduk coast in the Gangjeong badang(sea) is reclaimed with concrete by the construction?

Posted by NO Base Stories of Korea at 9:48 PM