Text Fwd: Space: A competitive, hotly contested warfighting frontier for the US military 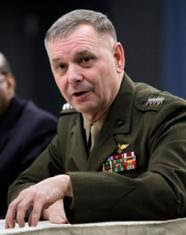 In this photo taken Jan. 28, 2011, Joint Chiefs Vice Chairman Gen. James E. Cartwright speaks at a Pentagon briefing. A new military strategy for space calls for greater cooperation with other nations on space-based programs to improve America's ability to deter enemies. Cartwright, speaking at a forum of the Center for Strategic and International Studies, said nations need to have guidelines to govern the approximately 22,000 manmade objects orbiting earth, including about 1,100 active satellites. (AP Photo/Pablo Martinez Monsivais)

WASHINGTON – The U.S. military needs to better protect its satellites
and strengthen its ability to use them as weapons as the uncharted
battlefield of space becomes increasingly crowded and dangerous,
Pentagon leaders say.

A new military strategy for space, as mapped out by the Pentagon,
calls for greater cooperation with other nations on space-based
programs to improve America's ability to deter enemies.

"It's a domain, like air land and sea," said Gen. Kevin Chilton, who
led U.S. Strategic Command until he retired late last month. "Space is
not just a convenience. It's become a critical part in every other
(battlefield) domain."

The U.S., Chilton said, needs to make sure that it protects and
maintains the battlefield capabilities it gets from space-based
assets, including global positioning data, missile warning system
information, and communications with fighters or unmanned drones that
are providing surveillance or firing missiles against the enemy.

As the U.S. and other countries depend more on their satellites for
critical data, those assets become greater targets for their enemies.

"It's prudent to anticipate that, at this point, we will not go into a
future conflict with a sophisticated adversary and not expect to be
challenged in the space domain," Chilton told The Associated Press in
an interview. "We need to be thinking about how we would go into
future conflicts and make sure that we un-level (that) battlefield in
our favor."

While the new strategy ­ the first of its kind ­ stresses the peaceful
use of space, it also underscores the importance of satellites in both
waging and deterring war.

"We need to ensure that we can continue to utilize space to navigate
with accuracy, to communicate with certainty, to strike with precision
and to see the battlefield with clarity," said William Lynn, deputy
defense secretary.

Lynn and other Pentagon leaders say space has become more congested,
competitive and contested, and the U.S. needs to keep pace on all
fronts.

Gen. James Cartwright, vice chairman of the Joint Chiefs of Staff,
said the U.S. and other nations must develop rules of the road for
space that lay out what is acceptable behavior and movement there.

At a forum put on by the Center for Strategic and International
Studies, Cartwright said nations need to have guideline that govern
the approximately 22,000 manmade objects orbiting earth, including
about 1,100 active satellites.

For example, he said, there is nothing that requires objects to pass
left to left, or that says which country should move its satellite if
two objects are on a collision course.

While avoiding crashes is an important goal, officials said nations
also need to ensure that their communications and other signals
passing through the satellites also do not conflict.

The strategy offers little detail about offensive operations in space.
But defense officials say that China, Iran and others have
demonstrated their abilities to take action in space.

In January 2007, China startled world leaders when it took out a
defunct weather satellite with a warhead launched on board a ballistic
missile.

China's actions made it the first country to destroy a satellite with
a ground-based missile. The U.S. and Russia had shot down satellites,
but the U.S. did it in 1985 with an air-launched missile and the
Soviets with a hunter satellite.

The China shoot-down alarmed officials, who said it signaled the
launch of space wars and would set off a race to militarize space.

According to James Lewis, a national security expert at the Center for
Strategic and International Affairs, an attack against U.S. satellites
can immediately degrade military performance, taking out
communications, data links and other networks needed to operate
weapons, sensors and fighters in the air.

"We need some kind of understanding among spacefaring nations about
what we can and can't do," Lewis said, adding that a key is to have
layers of defense, so there are backups if one set of signals is lost.

The new space strategy, endorsed by top Pentagon and intelligence
officials, also shows the importance of having alternatives. For
example, if a satellite signal is being jammed, officials should be
able to go to another or to an air or sea-based signal.

The U.S. also needs to make it known that even if another nation
attacks an American satellite, the U.S. military response wouldn't be
limited to a space-based action, officials said. It could turn to any
of its warfighting capabilities.

Online: National Space Strategy:
http://us.rd.yahoo.com/dailynews/ap/ap_on_re_us/storytext/us_military_in_space/40295813/SIG=10shupgr5/*http://tinyurl.com/4vsdopr
Posted by NO Base Stories of Korea at 8:34 AM