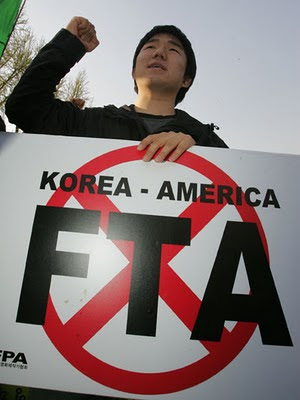 The Obama administration, along with Lee Myung-bak administration of South Korea, is pushing for the ratification of the Korea-U.S. Free Trade Agreement (FTA) this year, despite vocal oppostion from both sides -- citizen groups and farmers in South Korea and labor and public-interest organizations in the U.S. such as the AFL-CIO. Economist Martin Hart-Landsberg takes a look at one of the component of the proposed FTA --the investment chapter-- in the following commentary from the Korea Policy Institute.

President Obama has said that the U.S. needs to compete more effectively for exports. That is why he is calling on Congress to ratify U.S. free trade agreements with Korea, Columbia, and Peru.

In the public back and forth about these free trade agreement most of the arguments are about whether the designated tariff reductions mandated by the agreements will produce jobs for U.S. workers. In fact, there is little reason to believe that they will. But, more importantly, little attention has been focused on the fact that these free trade agreements contain many chapters that have far reaching implications beyond employment numbers.

In fact, the U.S. free trade agreement with Korea includes 24 chapters. One of those chapters deals with investments. In broad brush, the investment chapter establishes broad limits on the ability of governments (at all levels) to regulate or interfere with private profit seeking investments by (foreign) corporations. See more.
Posted by NO Base Stories of Korea at 9:13 AM