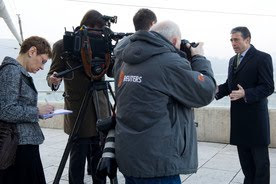 NATO Secretary General convenes emergency meeting of the North Atlantic Council
During a visit to Budapest, the NATO Secretary General made the following statement:
What is happening in Libya is of great concern to all of us. It’s a crisis in our immediate neighbourhood. It affects the lives and safety of Libyan civilians and those of thousands of citizens from NATO member states. Many countries are now evacuating their citizens from Libya – clearly, a massive challenges.
I can tell you that I have convened an emergency meeting of the NATO council this afternoon to consult on the fast-moving situation. I will return to Brussels in a few hours. Before I do so, I will meet with EU Defence Ministers and discuss with them how we, in a pragmatic way, can help those in need and limit the consequences of these events.
Q (Reuters): What kind of possible action can NATO consider to help resolve this crisis? NATO Secretary General: I will not go into specifics at this time, but clearly priority must be given to evacuation and possibly, also, humanitarian assistance.
Q (Reuters): What kind of capabilities does NATO have to deploy and how quickly can they deploy these capabilities, if the need arises?
NATO Secretary General: I think, again, it’s a bit pre-mature to go into specifics, but it’s well known that NATO has assets that can be used in a situation like this and NATO can act as an enabler and coordinator, if and when, individual member states want to take action.
__________________________________________
See also Stop NATO
Report: NATO Prepares For Air Strikes Against Libya
The Teamasek Preview
NATO is preparing a possible strike on Libya if the Libyian Government continue to bomb protesters.

A NATO official who spoke to the Al-Quds al-Arabi newspaper in London said that U.S. and NATO planes stationed in southern Italy have been preparing for the mission since Thursday morning.

International momentum is building for action to punish Gadhafi’s regime for the bloody crackdown it has unleashed against the uprising that began on 15th February.

On Wednesday night, U.S. President Barack H. Obama said that the suffering and bloodshed in Libya “is outrageous and it is unacceptable”, adding that a NATO attack on Libya was a possibility.

French Defense Minister Alain Juppé said that he hoped that Qaddafi would soon be deposed, and that if he was not, France would likely support sanctions against the country.

The U.N. Security Council held an emergency meeting that ended with a statement condemning the crackdown, expressing “grave concern” and calling for an “immediate end to the violence” and steps to address the legitimate demands of the Libyan people.

Reports said that thousands had been killed in Libya after being bombarded by air and naval strikes. (Alan Au)
Posted by NO Base Stories of Korea at 9:10 AM