Text Fwd: A Message from Crane No. 85 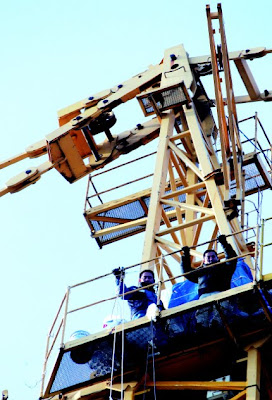 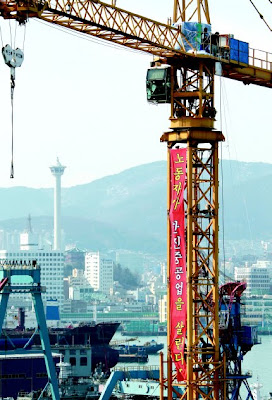 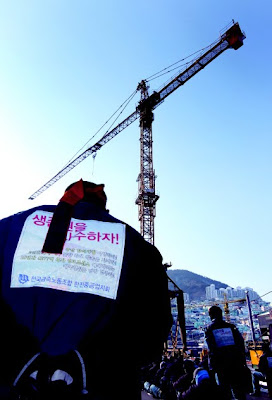 On Monday, Hanjin Heavy Industries and Construction (HHIC) announced that it would finalize its list of workers targeted for layoffs. The HHIC a lso announced that it was laying off 650 workers once before, in 2003. After two years of dispute between labor and management, it agreed to pull its restructuring plans, but the company unilaterally overturned that agreement. On that day, Kim Ju-ik, head of the HHIC chapter of the Korean Metal Workers’ Union (KMWU), went up by himself into Crane No. 85 at the Yeongdo shipyard and held out for 129 days before finally hanging himself from the crane. Perhaps another member was a partner in death, unable to let him go off alone to the next world after 129 days of ghastly isolation. It was only after another union member, Gwak Jae-gyu, took his own life that the struggle came to an end after more than two years.

The next seven years saw an uneasy peace. After the Lee Myung-bak administration came into office, however, HHIC capital once again brandished the blade of layoffs last year. HHIC capital reproduced the exact same situation as in 2003, with the layoff announcement, the union strike, the labor-management agreement, and the unilateral overturning of the agreement by the company.

In the process, more than 3,000 subcontracted workers lost their jobs. I spent many sleepless nights asking myself how many more workers had to be fired from this factory before the battle would come to an end. Hundreds of times, I asked myself what choice I would have made if I were Ju-ik, my close friend for twenty years. Finally, on Janu. 6, I went up myself into crane No. 85, the same one he had mounted eight years before. On Monday, KMWU Busan Yangsan branch head Mun Cheol-sang and HHIC chapter head Chae Gil-yong went up into a different crane.

Monday, my fortieth day inside this crane, was Valentine’s Day. Even here in Crane No. 85, disconnected and far off from the world, two bags of chocolates were hoisted up on a rope. One was handmade by the middle school daughter of a union member who did not file for voluntary resignation and is scheduled to be laid off. The other was sent by the sixth grader daughter of a subcontracting worker.

The date when girls, with quivering heart, pass chocolates made with trembling little hands to the boyfriend who set their hearts fluttering. Did that middle school girl know it was also the day her father was being fired from his factory after 26 years of service? Did the sixth grader daughter of that subcontracting worker know that when a regular worker is fired, her irregular worker father ends up living out of a bag and traveling from place to place in search of work?

Attached to the chocolates sent by the subcontracting worker’s sixth grader daughter was a letter that reads, “We hope you can come down quickly, we will treat you to some meat.” If I was this choked up over a letter written by a girl I’d never heard of or laid eyes on before, imagine how Kim Ju-ik must have cried when he received a letter from his own nine-year-old daughter reading, “Daddy, I’ll find you a job. Please stop what you’re doing.” Imagine how he felt at the end, unable up to keep his promise to his three children to buy them Wheelies sneakers when he came back down.

The world forced him to abandon one of his two promises. In the end, he chose his promise to the union members and go back on his promise to his children. Having to go back on one promise in order to keep another - these are the rules of the game made by the capitalists.

At 3:15 a.m. on Jan. 6, as I was climbing Crane No. 85, I grabbed onto one of the right-angled steps. For an instant, a sharp blade cut across my heart. I realized that here, in this space of isolation where a man cried out plaintively to the world and no one listened - here was where Kim Ju-ik, father of three children and representative of workers, first set down his heavy load. It was a spot that I confirmed by hunch eight years later.

Right now, I am sitting where Ju-ik sat, seeing the last landscape he saw before departing this world. I can see people passing blithely by and cars busily traveling in either direction. How many of them can see the hand of a female worker who held out for 27 years after being fired at the age of 26, with the single dream of returning to her co-worker’s side, and who now waves earnestly at the world from this crane with a promise to defend that co-worker?
February 14, Crane No. 85, Yeongdo Shipyard, Hanjin Heavy Industries

The views presented in this column are the writer‘s own, and do not necessarily reflect those of The Hankyoreh.
Posted by NO Base Stories of Korea at 8:26 AM