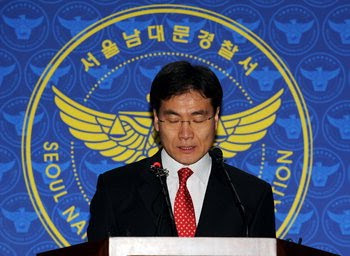 Seo Bumkyu, Head of Namdaemun Police Station, briefs about the investigation processes concerning break-in at the hotel room for the special delegation of the Indonesian President on Monday, Feb 21, 2011. However, the investigation about the break-in incident by police will not be acitve considering the remarks by Police Commissioner Cho Hyun-oh to the effect that the incident was for the sake of the national interest of Korea.
Photo by Kim Segu/ Caption by Seol Wontai

Kyunghyang Shinmun
Illegal and Clumsy Intelligence Activity by NIS Brings Shame upon South Korea
Posted on Feb. 22, 2011
It has emerged that the people caught last week after breaking into the Seoul hotel room of a visiting Indonesian presidential delegation were employees of the National Intelligence Service (NIS). The NIS is officially denying such claims, but multiple government authority figures have confirmed that the break-in was the work of NIS employees.

The occurrence of such a scandalous incident at a time when the Korean government had invited a foreign delegation numbering more than 50 people, including six ministers of state, and was discussing a plan for economic and military cooperation that included exports of weapons such as fighter aircraft and tanks, brings unprecedented international disgrace upon Korea.

Since the break-in occurred when the delegation was on its way to meet President Lee Myung-bak, moreover, the scale of this diplomatic discourtesy is even greater. The Lee government has itself damaged the national dignity upon which it has placed so much emphasis.

It is not our view that this incident occurred by accident. Since the Lee administration took office, South Korea's intelligence services have become more active both in and outside the country, while it has constantly been claimed that activities previously regarded as illegal have been reappearing.

When Frank La Rue, UN Special Rapporteur for Freedom of Opinion and Expression, visited Korea in May last year, he made an official protest to the Ministry of Foreign Affairs and Trade (MOFAT) that he had been tailed by an NIS employee.

In August 2009, a captain from the Defense Security Command (DSC) was caught illegally monitoring civilians taking part in a strike rally at the SsangYong Motor factory in Pyeongtaek. NIS employees also make an appearance in the story of illegal monitoring of civilians by the Office of the Prime Minister and Cheongwadae (the office of the president).

No intelligence agency has apologized for these incidents, however, and there has been no announcement about anyone being punished. The DSC captain, on the contrary, has been promoted. Ultimately, this latest incident can only be regarded as an inevitable result of ignoring or encouraging such unreasonable intelligence activity.

The eagerness of intelligence agencies to produce results that please those in power is also problematic. The opposition party suspects that Lee Myung-bak's policy of achieving weapons exports at all costs may have played a background role in this incident.

Since yesterday, the Indonesian government has been making requests to the NIS, via the MOFAT, for confirmation of whether it was involved in the incident. The Korean government must minimize the adverse effect of this scandal on bilateral relations with Indonesia, by making a serious apology after investigating the truth of what happened and determining who is responsible.

If the Lee government does not do this, how can any foreigner feel safe when visiting Korea, or enter with confidence into negotiations with the Korean government?

National Police Agency commissioner Cho Hyun-oh, however, has shown a passive attitude, asking, "If it turns out to have been the work of NIS employees, they would have been doing it for the benefit of the country, so what would be the practical benefit of punishing them?"

President Lee must order the police to conduct a strictly fair investigation. If priority is given to national interest and the matter is covered up, this will do far more harm than good. In this context, abnormal intelligence activities carried out for the sake of national security must no longer be tolerated. (Ed. Feb 22, 2011)
See also Hankyoreh
Posted by NO Base Stories of Korea at 9:24 AM