Futenma is not the only base issue anguishing Okinawa these days. There's a village called Takae in northern Okinawa and the problem facing Takae is that, in return for an unused portion of the U.S. Marine Corps Northern Training Area, Tokyo agreed with Washington to construct six helipads (diameter: 75 meters each) for the U.S. Marines' V-22 Ospreys in the lush forests surrounding the village.

The helipad construction is apparently interconnected with the planned relocation of the Futenma air station to Henoko, located also in northern Okinawa. The noise pollution caused by the Ospreys is said to be beyond human forbearance as the storm of protest showed lodged against the Marines on January 27 by the citizens of Brewton, Alabama, for the maneuvering of the Ospreys at the city’s airport. 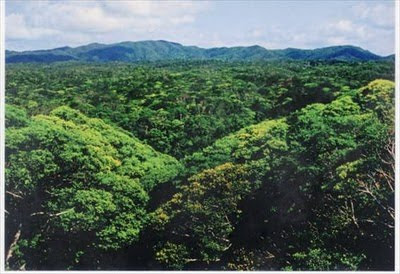 Takae's lush forest where Tokyo wants to construct of six helipads (diameter of 75 meters each) for U.S. military V-22 Ospreys. Over 192 plant and animal (most are endangered) species are unique to this area. Photo: Yoshio Shimoji)

Takae sits amidst lush forests and natural beauty. Imagine how horrible its beautiful landscape would become if the construction actually started. The training and the deafening noise of the infamous Ospreys would certainly destroy the peaceful environment for not only the Takae villagers but also those precious species, some already listed as endangered, that are indigenous to Yanbaru (or Northern Okinawa Highland). 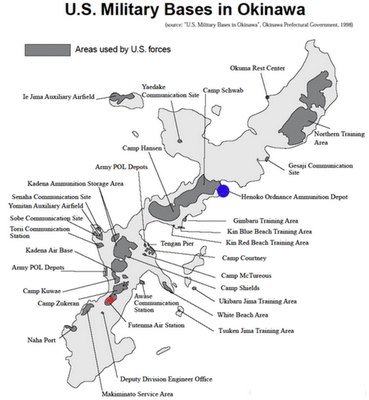 According to the February 12 Japan Times, Senator Daniel Inouye again urged Tokyo to make headway for the early relocation of Futenma, saying “The U.S. side has been patient, although it cannot wait indefinitely.” This is a gangster’s typical pet line when he intimidates others — that is, Senator Inouye is threatening Tokyo to expedite Washington’s decades-old design of Futenma’s relocation to Henoko.

He may not know, but the Marines or the U.S. Navy representing them submitted to U.S. Congress every fiscal year in the 1960’s a blue print for the relocation of Futenma to Henoko for a budgetary approval, which was never approved because of sky-rocketing Vietnam War expenditures. How dare he say “the U.S. side cannot wait indefinitely”? That’s a laughing matter, indeed. 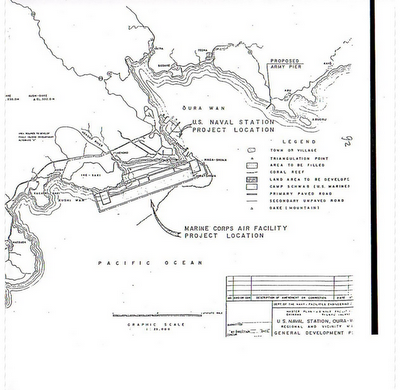 (The blueprint for a new air station, a military port, and a pier, from the Master Plan of Navy Facilities on Okinawa, 1966. Image: Asia-Pacific Journal)

Mr. Shimoji's "The Futenma Base and the U.S.-Japan Controversy: An Okinawan Perspective" was published at The Asia Pacific Journal earlier this year.

His letter letter, "How dare Obama ask Hatoyama to act without regard to democratic process in Okinawa?" was published at the The New York Times on May 28, 2010, and his article, "'Thanks' Doesn't Allay Okinawans," was published on July 11, 2010, at The Japan Times.
Posted by NO Base Stories of Korea at 2:28 AM