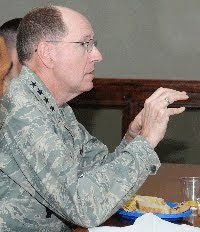 Maj. Gen. Alfred Flowers, the service's deputy assistant secretary for
budget matters, at a Monday press conference listed the Strategic
Command building project among the "highest priorities" in the housing
and construction spending plan for U.S. combatant commanders around
the globe.

The line item is part of a $671 billion Defense Department request for
funds in the coming fiscal year, which begins on October 1.

The $564 million facility is to replace a 54-year-old building that
has been plagued by electricity failures, fires and flooding, Senator
Ben Nelson (D-Neb.) said at a Senate Armed Services Committee hearing
last March.

Late last year, the Cold War-era headquarters was inundated with water
following a water main break. The facility endured several days of
power, heat and plumbing outages after 13,000 square feet of its vast
underground command center were flooded. At the peak of the deluge,
the building's boiler room was under 5 feet of water.

Based at Offutt Air Force Base in Omaha, Neb., Strategic Command has
combat responsibility for the nation's nuclear-armed bomber aircraft,
ICBMs and submarines. Its new commander, Air Force Gen. Robert Kehler,
would oversee military orders to launch any nuclear strikes approved
by a U.S. president.

The organization's duties have expanded in recent years to include
space, cyberspace, global missile defense, and intelligence,
surveillance and reconnaissance. Strategic Command also coordinates
military efforts to combat weapons of mass destruction around the
globe.

Nelson -- who has secured $33 million in appropriations earmarks since
fiscal 2009 to design the new 1.09-million-square-foot facility --
lauded the inclusion of construction funds in the new budget request.

"The president's commitment to a new headquarters is extremely good
news ... for those charged with ensuring that STRATCOM [meets] its
challenging missions in the years ahead, and for America's national
security," the lawmaker said in a written statement released on
Monday.

Blueprints for the new building -- which is to replace a
1.06-million-square-foot facility -- were roughly 75 percent complete
last month.

"Not only is the existing facility outdated and showing signs of
troubling decay, STRATCOM has new responsibilities in the 21st century
that require a modern headquarters to carry out its nuclear, space,
and cyberspace missions," Nelson said. "As soon as Congress approves
the president's plans, we'll begin to see that 21st century
headquarters take shape, securing our future."

The building could be erected by the end of 2015, according to the
Army Corps of Engineers, which is overseeing the work.
Posted by NO Base Stories of Korea at 7:27 AM