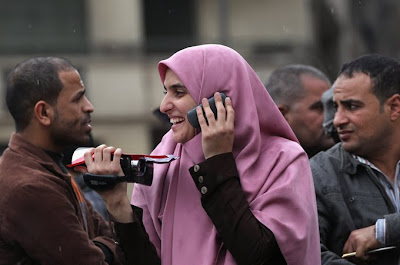 In this op ed piece, “Why Egypt’s progressives win”, Paul Amar an Associate Professor of Global & International Studies at the University of California, Santa Barbara, provides a nuanced analysis of the various forces that created and is shaping the revolution underway in Egypt. He describes the evolution of the Muslim Brotherhood and emerging contradictions within its ranks. The youth and women wings of the Brotherhood have broken away from the “new old guard” to align with leftists and liberals. The Egyptian military also plays a pivotal role due to its own class interests that are not in alignment with the Mubarak regime. But he gives the most credit to the worker’s movement and the anti-police brutality movement for building the base of the present revolution:

It is crucial to remember that this uprising did not begin with the Muslim Brotherhood or with nationalist businessmen. This revolt began gradually at the convergence of two parallel forces: the movement for workers’ rights in the newly revived factory towns and micro-sweatshops of Egypt – especially during the past two years – and the movement against police brutality and torture that mobilised every community in the country for the past three years. Both movements feature the leadership and mass participation of women of all ages and youth of both genders. There are structural reasons for this.

The New York Times ran an interesting article about the young, technologically savvy professionals that have played a crucial role as intellectuals, organizers and mobilizers of the movement. The article discusses some of the modern mobilization tactics being deployed by the activists to outwit the violent and repressive police state. Also remarkable is the political and ideological diversity of the actors:

They were born roughly around the time that President Hosni Mubarak first came to power, most earned degrees from their country’s top universities and all have spent their adult lives bridling at the restrictions of the Egyptian police state — some undergoing repeated arrests and torture for the cause.

They are the young professionals, mostly doctors and lawyers, who touched off and then guided the revolt shaking Egypt, members of the Facebook generation who have remained mostly faceless — very deliberately so, given the threat of arrest or abduction by the secret police.

Now, however, as the Egyptian government has sought to splinter their movement by claiming that officials were negotiating with some of its leaders, they have stepped forward publicly for the first time to describe their hidden role.

There were only about 15 of them, including Wael Ghonim, a Google executive who was detained for 12 days but emerged this week as the movement’s most potent spokesman.

Yet they brought a sophistication and professionalism to their cause — exploiting the anonymity of the Internet to elude the secret police, planting false rumors to fool police spies, staging “field tests” in Cairo slums before laying out their battle plans, then planning a weekly protest schedule to save their firepower — that helps explain the surprising resilience of the uprising they began.

READ THE FULL ARTICLE
Posted by NO Base Stories of Korea at 8:30 AM