Text Fwd: The Struggle for Self-Determination in the Arab World: The Alliance between Arab Dictators and Global Capital 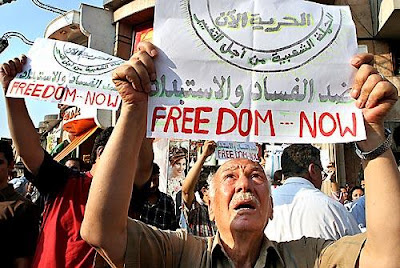 Global Research
The Struggle for Self-Determination in the Arab World: The Alliance between Arab Dictators and Global Capital
PART II: Is 1848 Repeating Itself in the Arab World?
by Mahdi Darius Nazemroaya
February 14, 2011

Is history repeating itself? Have the events of 1848 in Europe repeated themselves in the Arab World? Will 2011 see the same outcomes as 1848? Only the Arab people can decide. Their fate is in their hands, but they should learn from the mistakes of 1848 and seriously address the role of the capitalist class.

The Struggle for Self-Determination in the Arab World

During the formal period of colonialism, the authority of the colonial powers (Britain, France, and Italy) were politically visible. Today, the Arab World is under the "invisible authority" of the neo-colonial powers. These include the U.S., Britain, and France.

The modern-day neo-colonial powers maintain control over Arab countries through the supervision of their economies and the control of their political leaders, who serve neo-colonial interests as vassals. Thus, 2011 is not only the start of the second wave of Arab revolt against foreign rule via imposed dictators and corrupt regimes, but it is also part of a broader struggle against neo-colonialism.

Starting with Tunisia, revolts and protests have broken out across the Arab World. Algeria, Yemen, Jordan, the Israeli-occupied Palestinian Territories, Mauritania, Sudan, and Egypt have all been electrified with activism. Added to this is the political tension in Lebanon, continued instability in Iraq under American-led foreign military occupation, building tensions in Bahrain, and the balkanization of Sudan.

At first glance the Arab World seems to be in turmoil, but there is much more than meets the eye.

The Arabs have not awoken, they have watched in anger and frustration. The Arab people are now mobilizing. The Arab masses, like the immune system of a body, are now combating the diseases that have been infecting the Arab World. The Arabs are in action.

The Arab people grasp the fact that their ruling class and governments are not only corrupt regimes, but also comprador elites, namely the local representatives of foreign corporations, governments, and interests. The capitalist class that these local Arab comprador elites are subservient to are properly called parasite or parasitic elites, because they siphon off local wealth and resources on behalf of their neo-colonial masters.

This structure of comprador elites prevails in Egypt, Tunisia, Lebanon, and the Palestinian Authority.
READ MORE
Posted by NO Base Stories of Korea at 7:15 AM