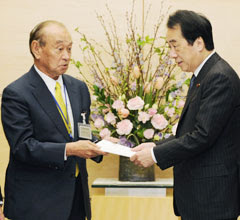 (Governor Nakaima hands request to Prime Minister Kan, asking him to move the U.S. Marine Air Station Futenma off the island and to cancel a proposal for new base in Henoko. Photo: Ryukyu Shimpo.)

On Feb. 8, Governor Nakaima and a group of Okinawan mayors handed a request to Naoto Kan, asking the Japanese prime minister to move the US Marine Air Station Futenma off the island and to cancel the plan for a new "replacement" mega-base in Henoko, an environmentally sensitive area on the island. The mayors included Mayor Susumu Inamine of Nago City, Mayor Takeshi Asato of Ginowan City, and 9 other mayors from base-hosting communities.

Their request, the first formal request of 2011, follows a 15-year sit-in protest at Henoko; a 3-year protest at Takae in Yanbaru Forest; numerous statements, plebiscites, resolutions, elections, and mass protest rallies across Okinawa over the past fifteen years — all demanding the closure of Futenma and the cancellation of the proposal of a new U.S. base at Henoko. 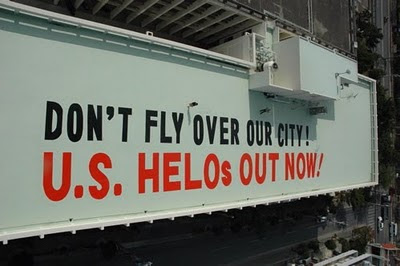 "How many of these elections, plebiscites, resolutions, and mass-scale rallies do the central government and US Government need to hear about in order to REALLY get the message - one simple message that Okinawa (nor any other prefecture) does NOT want another base?"

Okinawans have tried to get their message through to Tokyo and Washington via lawsuits; articles and books; an advertisement in the Washington Post; statements across rooftops, in the sand, on t-shirts, painted on faces, spelled out in candlelight by human formation, on monuments; and flying from banners on boats and flag posts; through songs, photographs, and festivals; and global solidarity rallies with supporters wearing dugong masks and Okinawa woodpecker hats.

Posted by NO Base Stories of Korea at 8:55 AM