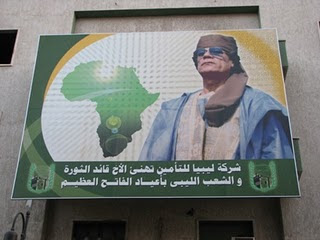 Is Tripoli being set up for a civil war to justify U.S. and NATO military intervention in oil-rich Libya?
Are the talks about sanctions a prelude to an Iraq-like intervention?

Something is Rotten in the so-called “Jamahiriya” of Libya

There is no question that Colonel Muammar Al-Gaddafi (Al-Qaddafi) is a dictator. He has been the dictator and so-called “qaid” of Libya for about 42 years. Yet, it appears that tensions are being ratcheted up and the flames of revolt are being fanned inside Libya. This includes earlier statements by the British Foreign Secretary William Hague that Colonel Qaddafi had fled Libya to Venezuela. [1] This statement served to electrify the revolt against Qaddafi and his regime in Libya.

Although all three have dictatorship in common, Qaddafi’s Libya is quite different from Ben Ali’s Tunisia or Mubarak’s Egypt. The Libyan leadership is not outright subservient to the United States and the European Union. Unlike the cases of Tunisia and Egypt, the relationship that exists between Qaddafi and both the U.S. and E.U. is a modus vivendi. Simply put, Qaddafi is an independent Arab dictator and not a “managed dictator” like Ben Ali and Mubarak.

In Tunisia and Egypt the status quo prevails, the military machine and neo-liberalism remain intact; this works for the interests of the United States and the European Union. In Libya, however, upsetting the established order is a U.S. and E.U. objective.

The U.S. and the E.U. now seek to capitalize on the revolt against Qaddafi and his dictatorship with the hopes of building a far stronger position in Libya than ever before. Weapons are also being brought into Libya from its southern borders to promote revolt. The destabilization of Libya would also have significant implications for North Africa, West Africa, and global energy reserves.

Qaddafi’s rise to power started as a Libyan captain amongst a group of military officers who carried out a coup d’état. The 1969 coup was against the young Libyan monarchy of King Idris Al-Sanusi. Under the monarchy Libya was widely seen as being acquiescent to U.S. and Western European interests.

Although he has no official state or government position, Qaddafi has nurtured and deeply rooted a political culture of cronyism, corruption, and privilege in Libya since the 1969 coup. Added to this is the backdrop of the “cult of personality” that he has also enforced in Libya.

Qaddafi has done everything to portray himself as a hero to the masses, specifically the Arabs and Africans. His military adventures in Chad were also tied to leaving his mark in history and creating a client state by carving up Chad. Qaddafi’s so-called “Green Book” has been forcefully portrayed and venerated as being a great feat in political thought and philosophy. Numerous intellectuals have been forced or bribed to praise it.

Over the years, Colonel Qaddafi has tried to cultivate a romantic figure of himself as a simple man of the people. This includes pretending to live in a tent. He has done everything to make himself stand out. His reprimanding of other Arab dictators, such as King Abdullah of Saudi Arabia, at Arab League meetings have made headlines and have been welcomed by many Arabs. While on state visits he has deliberately surrounded himself with an entourage of female body guards with the intent of getting heads to turn. Moreover, he has also presented himself as a so-called imam or leader of the Muslims and a man of God, lecturing about Islam in and outside of Libya.

Libya is run by a government under Qaddafi’s edicts. Fear and cronyism have been the keys to keeping so-called “order” in Libya amongst officials and citizens alike. Libyans and foreigners alike have been killed and have gone missing for over four decades. The case of Lebanon’s Musa Al-Sadr, the founder of the Amal Movement, is one of the most famous of these cases and has always been a hindrance to Lebanese-Libyan relations. Qaddafi has had a very negative effect in creating and conditioning an entire hierarchy of corrupt officials in Tripoli. Each one looks out for their own interests at the expense of the Libyan people.

Fractions and Tensions inside the Hierarchy of Qaddafi’s Regime

Because of the nature of Qaddafi’s regime in Tripoli, there are a lot of internal tensions in Libya and within the regime structure itself. One of these sets of tensions is between Saif Al-Islam Gaddafi and his father’s circle of older ministers. Libyan ministers are generally divided amongst those that gather around Saif Al-Islam and those that are part of the “old guard.”

There are even tensions between Qaddafi and his sons. In 1999, Mutassim Al-Qaddafi tried to ouster his father while Colonel Qaddafi was outside of Libya. Mutassim Qaddafi holds a Libyan cabinet portfolio as a national security advisor. He is also famously known amongst Libyans for being a playboy who has spent much of his time in Europe and abroad. There is also Khames Gaddafi who runs his own militia of thugs, which are called the Khames militia. He has always been thought of as possible contender for succession too against his other brothers.

There have always been fears in Libya about the issue of succession after Colonel Qaddafi is gone. Over the years, Qaddafi has thoroughly purged Libya of any form of organized opposition to him or prevented anyone else, outside his family, from amassing enough power to challenge his authority.
READ MORE
Posted by NO Base Stories of Korea at 10:18 AM