Text Fwd: Bahrain: The Social Roots of Revolt Against Another US Ally 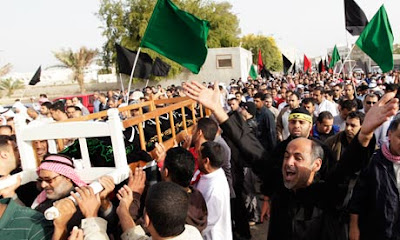 Global Research
February 18, 2011
Bahrain: The Social Roots of Revolt Against Another US Ally

Bahrain, February 18. 2011. “Have you ever seen an island with no beaches?” The question posed by the young Bahraini taxi man standing among thousands of chanting anti-government protesters seemed at first to be a bit off the wall. But his explanation soon got to the heart of the grievances that have brought tens of thousands of Bahrainis on to the streets over the past week – protests which have seen at least seven civilians killed amid scenes of excessive violence by state security forces. Unconfirmed reports put the death toll much higher.

Many Bahrainis, like the young taxi man, have witnessed huge wealth sloshing around their diminutive country of less than 600,000 indigenous people (perhaps another 300,000 are expatriates, official figures are vague). But so little of that wealth – especially in the last seven years of high oil prices when Bahrain’s national revenue tripled – has found its way into creating jobs and decent accommodation. More than 50,000 Bahraini families are estimated to be on waiting lists for homes. Some families have been waiting for over 20 years to be housed, with several generations sharing the one roof, in cramp conditions with poor sanitation.

All the while, these people have come to feel like strangers in their own land, with their squalid conditions in inner-city areas and villages being in sharp contrast to the mega shopping malls and multi-storey buildings that have sprung up to attract US and European investors, financiers, companies and rich tourists.

The Gulf island’s oil wealth has been channeled into diversifying the economy away from dependence on oil and gas revenues into other sectors such as property development and international banking. The self-styled kingdom, which is sandwiched less than 30 kilometers on either side between the oil and gas giants of Saudi Arabia and Qatar, has leveraged its hydrocarbon wealth to earn a reputation as a finance and trade hub in the Middle East on a par with Dubai located further south along the Arabian Peninsula in the United Arab Emirates.

But that reputation for being a cutting-edge capitalist hub – Bahrain is the only country in the Gulf region to have signed a free trade agreement with the US – comes at a heavy social and ecological cost. And it’s a cost that seems to have pushed a large section of the population too far, to the point where they are emulating the protests in Tunisia, Egypt and other parts of the Arab world to demand long-overdue democratic rights.

In the early hours of Thursday, up to five thousand Bahraini protesters were forced from the main demonstration site at the Pearl Roundabout, a landmark intersection in the capital, Manama. The Bahraini authorities deployed helicopters, dozens of tanks and armoured personnel carriers, with army and police firing teargas and live rounds. Among the protesters were hundreds of women and children.

At the centre of the site is the Pearl Monument, which alludes to the country’s traditional pearl diving and fishing industries – industries that were the mainstay of communities.

Within view of the monument are the iconic skyscrapers of Bahrain’s newfound wealth, including the Financial Harbour and the World Trade Center. Only a few years ago, this entire area of the capital was sea, the land having been reclaimed and developed. Up to 20 per cent of Bahrain’s total land area has been reclaimed from the sea over the past three decades.

However, this vast reclamation and development drive has, according to local environmental groups, devastated the island’s marine ecology and fish stocks in particular. The rampant development – which has made fortunes for the country’s elite – has had an equally devastating effect on local communities who have depended on the sea for their livelihoods. While these communities have suffered the blight of unemployment and poverty, they also have witnessed roaring property development, land prices and profits benefiting the ruling elite.

These communities have watched their country’s oil wealth being directed to serve elite interests with development plans that are geared to lure international capital. This has led to swathes of coastal areas being confiscated by members of the extended Al Khalifa royal family, to be earmarked for future reclamation and skyscraper development. That is how Bahrain has become something of a paradox – an island without any beaches. And it is this lopsided, elite-orientated development that is fuelling deep social grievances among the masses, grievances that are now being directed at those elites. Further state repression against such protests can only amplify these grievances.

Bahrain’s unstable social formation is underpinned by unwavering US diplomatic and military support. The island serves as the base for the US Fifth Fleet in the Persian Gulf. The latest wave of state repression has tellingly elicited only a subdued, ambivalent comment from Washington, urging “all sides to refrain from violence” – Washington-speak that translates into support for the government. Last year, Bahrain received $19.5 million in US military aid, which, on a per capita basis, equates to greater than that delivered to Egypt.

Once again, another uprising against another US-designated “important ally” seems to be underway in the Arab world. And once again, the contradiction of elite rule and widespread poverty – all the more glaring in oil-rich countries – is ultimately undermining Washington’s imperial designs.

Finian Cunningham is a journalist and musician: finianpcunningham@yahoo.ie, www.myspace.com/finiancunninghammusic
Posted by NO Base Stories of Korea at 8:27 AM