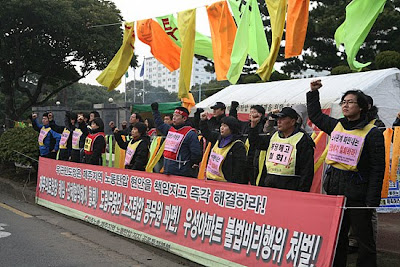 As it was later noticed again that the government would postpone removal of tent by Feb. 20, the workers, having an emergency rally, denounced the Woo Keun-Min Island government for its attempt to forcefully remove workers’ tent and claimed that they would struggle until their demands are accepted and that if the governor would proceed it, they would stage the movement for his resignation. 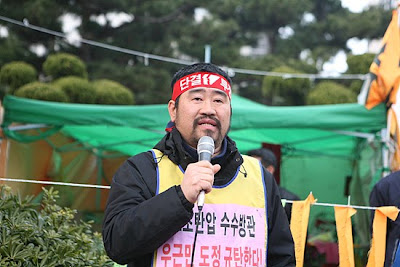 Goh Dae-Un, Chairman of the Jeju branch of the Korean Confederation of Trade Unions denounced the Woo Keun Min Island government that it has been neglecting the labor issue which has been the second biggest issue after that of the naval base in the Island.

The thing that infuriated the workers was the fact that the Island governor, Woo Keun-Min had left to Japan on Feb. 17 for the promotion for the Jeju Island to be one of the seven wonders of nature in November. It was told that he was accompanied with Moon Dae-Rim, the chairman of the Island Council and would return to home on Feb. 21, the next day planned for forceful removal of workers’ tent. 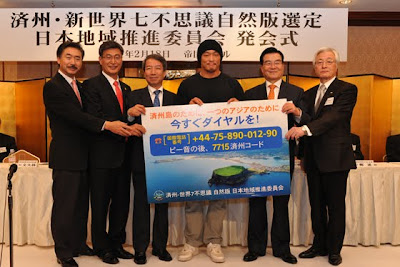 Go Gwon-Il, a Gangjeong villager has written about the nature of the Jeju Special Self-governing Island in one of his article speculated on the relationship between the central and Island government’s drive for the Jeju being one of the seven wonders and the origin of the Jeju Special-Self-Governing Province on Feb. 15, 2011.

The below is the translation of the part of his article:

The Jeju Special Self-Governing Province is an administrative district formed to establish a special zone to achieve business that cannot be done under the current law on the local self-governing, for the purpose to make an international freedom city.

The international freedom city does not mean a city in which all the people enjoy freedom but a city that various kinds of domestic and foreign corporations and capitals are not restricted in their investment even into casino business and non-profit sectors such as those of education and medical business.


It is because if the Jeju Island becomes one of the seven wonders of nature in the world, which guarantees international tourism site, the special tour zone that the Jeju Island currently drives would be accelerated and the will to drive for a high-tech medical complex (profit-oriented hospital) and various kinds of pleasure business can be more strongly supported.


They are the systems of the international freedom city and Jeju Special Self-Governing Island that the capitals of the big corporations can freely invest into profit-oriented hospitals that would collapse all the citizens’ medical service, into domestic casino and various gamble business that would drive the Island people’s lives to destruction; and profit-oriented schools (international English city) that would destroy public education, robbing of agricultural lands which are the basis of farmers and making their descendents as the slaves of the big corporations and huge capitalists.

Under such system, even though direct mayor-electoral system is resurrected, he/she would be nothing but a dummy because he/she does not have any rights to enactment of regulations and to self-governing budget for the self-governing city.

To say conclusion, unless an international freedom city is abolished and the special self-governing Island returns back to the Jeju Island in the past, the constitutionalism and democracy cannot but collapse.

Otherwise upon the installations of floating tags and tetra pods, the Gangjeong Village People’s council had a statement on Feb. 17. Below is the part of translation.

It is nothing but violence that the navy, making the Jeju naval base construction as an established fact, has pushed to install floating tags, tetra pods and layer for prevention of dirty water in preparation for the construction in earnest, in the situation when the agreement by the Island people has not been beforehand whatever its reasons have been.

The Woo Keun-Min Island governor should take off its fake what it calls as conflict solution that has no measure in fact, should actively step for the solution of the naval base issue, fix the matters occurred under the administrative violent oppression by the Kim Tae-Hwan ex-Island government, and establish fundamental measure with sincere consideration of whether the military base could stand together with the UNESCO triple crowned Peace Island, the Jeju Island that drives to be one of the seven wonders of nature in the world. 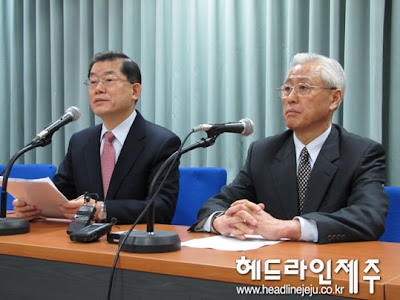 Another development in the extension of the voice opposing naval base construction is a joint statement by Shin Goo-Beom, the ex-Island governor and Moon Gook-Hyun, the representative of the Creative Korea Party. In the press interview at 11am, Feb. 18, it urged that the construction should be totally stopped until the court judgment of the lawsuits related to naval abse issue.

According to the Headline Jeju, Moon stated that “The judicial department should acknowledge of the proper qualification of the plaintiff (the Gangjeong villagers) in an appealed lawsuit on the confirmation on the cancellation of the absolute preservation areas and should make a judgment of whether the disposal by the [-ex] Island government and the resolution by the [ex-] Island council should be annulled or not.

He also urged the central government, Ministry of National Defense and the navy should totally stop the Jeju naval base construction until the currently hung lawsuits related to naval base ended.

At the end of the press interview, Shin Goo-Beom, the ex-Island governor said he was planning to hold a nationwide talk meeting in the National Assembly during the March so that the Jeju naval base issue could be extended to the nationwide, going beyond to the Jeju Island, negotiating with many personnel and groups who have the same will to realize the justice of the judicial system.
Posted by NO Base Stories of Korea at 8:20 AM