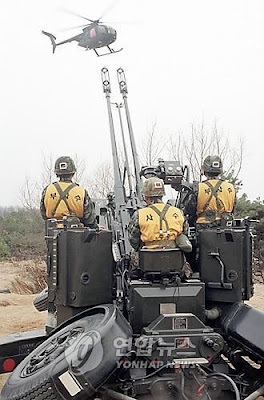 SEOUL, Feb. 11 (Yonhap) -- South Korea's defense ministry is investigating a U.S. arms broker and its local importer suspected of swindling the Army out of millions of dollars by supplying faulty barrels for anti-aircraft guns that safeguard the skies of the nation's capital, officials said Friday.

The ministry started the investigation following complaints early last year by the Army that some of the Oerlikon 35mm twin cannons didn't work properly because of the defective barrels, a ministry official said on the condition of anonymity.

"The investigation is also to determine allegations of bribery involving local procurement officials," the official said, without disclosing the name of the U.S. company.

Under a contract signed in 1998 with South Korea's arms procurement agency, the U.S. broker and the local importer were required to supply barrels of the anti-aircraft guns by 2003 to the Army by importing them from an overseas manufacturer.

The two firms, however, were suspected of selling barrels made by an unqualified company in South Korea by disguising them as imported ones, according to the official.

"We suspect that the two companies swindled the Army out of millions of dollars by exploiting the method," the official said.

The faulty barrels caused some of the guns to be damaged when fired, the official said, adding the Army is now replacing them with locally developed barrels.

Of 72 barrels on 36 Oerlikon twin cannons deployed in Seoul, 49 were found to be defective, the official said.

An official from the Joint Chiefs of Staff said the military's air defense capabilities were little affected by the defective weapons, as their areas of responsibility overlap with one another.

"Out of 49 defective barrels, 19 have already been replaced and the rest will be replaced before the end of May when additional shipments arrive," the official told reporters, asking not to be identified.

The official added the military will soon set up plans to replace its Oerlikon canons with new, indigenously developed anti-aircraft guns.

South Korea purchased the Oerlikons in 1975 to guard key sites in Seoul, including the presidential office of Cheong Wa Dae, and upgraded their control system and other parts early 2000s, the Army said.
Posted by NO Base Stories of Korea at 9:35 AM