* A story that tells militarism in South Korea.. 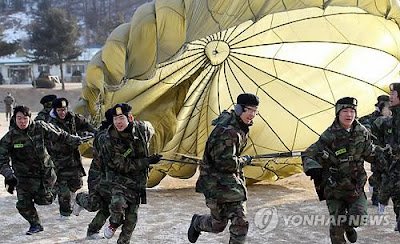 "Can you do it?" yelled an Army instructor
"Yes, I can!" Kim yelled back in a somewhat trembling voice, gripping the rope tightly as he got into position.

Below the tower, Kim's younger brother hollered, "Fighting!" Korea's equivalent to "Don't give up!." In a matter of seconds, the elder Kim launched himself downward and joined his brother.

"We were sent here by our parents. because we always argue, pick fights with each other and spend too much time playing computer games," said the older Kim, wearing a camouflage uniform and helmet.

Asked what the highlight of the boot camp program was for him, Kim put his hand on his 13-year-old brother's shoulder and said, "We learned to work together as a team, and we also learned the value of brotherhood."

Every winter, thousands of Korean teens like the Kims, as well as adults, volunteer to take part in the three-night, four-day military training program operated around the nation by the Army's Special Warfare Command.

The program is aimed at allowing civilians, especially the younger generation, to refresh and toughen themselves up, thus helping them better understand the military.


READ MORE
Posted by NO Base Stories of Korea at 9:19 AM