An estimated 10,000 troops from Korea, the United States and Thailand participated in a joint landing exercise in Hat Yao on Feb. 10 as part of the 30th annual Cobra Gold exercise.
[..]
On this day, Korean marines and sailors implemented joint landing operation along with U.S. and Thailand servicemembers by using assault amphibious vehicles under the U.S. 31st Marine Expeditionary Unit in Okinawa, Japan. The unit known as the first unit to be deployed to Korea in case of emergencies.
[..]
Cobra Gold, which began in 1982, is one of the world's largest multinational military exercises taking place in the Pacific region. Service members from Korea, Japan, Singapore, Malaysia and Indonesia joined hosts of Thailand and the U.S.

Korea had participated in the drill as an observer until 2009 but dispatched regular military unit of 332 marines and sailors last year to join joint combat exercise. 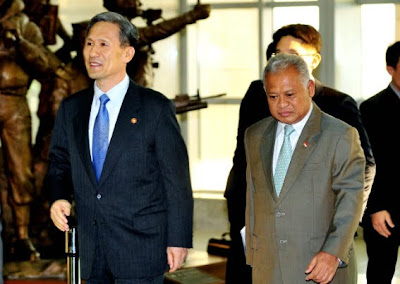 Yusgiantoro, as a leader of special envoy team for defense exchange, visited Korea on Feb. 14 to discuss strategic measures to deepen arms cooperation with Kim.


On Feb. 14, the head of Defense Acquisition Program Administration of Korea and Defense Vice Minister of Indonesia held talks for measures to reinforce long-term and comprehensive arms trade. 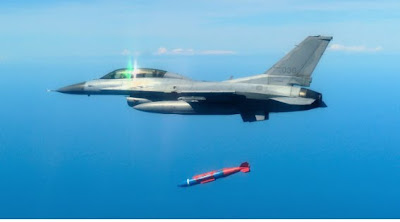 According to the Air Force, JDAM is a precision-guided bomb guided by an integrated inertial guidance system coupled to a Global Positioning System that can disable North Korea's long range artilleries and other strategic targets at the same time. So far, the state-of-the-art missile system has been operated on F-15K fighter jets. In order to operate JDAM on KF-16, producer has to either purchase proper software or develop it in Korea.

The Minister of National Defense Kim Kwan-jin was on a five-day trip to Afghanistan and the United Arab Emirates, which embarked on Feb. 7 with an aim to encourage Korean troops and provincial reconstruction team (PRT) who are stationed there for peacekeeping activities, according to the Defense Ministry on Feb. 9.

The ministry said that Kim inspected bases where "Ashena Unit" and PRT are stationed in the morning on Feb. 8 and examined security and safety conditions. Followed by the inspection, Kim encouraged Korean troops. Some 340 troops are operating to protect PRT to help rebuild the war-torn country.

In the afternoon, Kim had talks with U.S. Gen. David Howell Petraeus, the commander of International Security Assistance Force and U.S. Forces Afghanistan, and Abdul Rahim Wardak, Defense Minister of Afghanistan to discuss current situation in the local region and direction of mission performance.

During talks with Wardak, Kim asked for Afghanistan's support and cooperation for Ashena Unit.

As construction of unit's base ended on Jan. 24, Korean troops have moved from U.S. Bagram base to Charika base and it is preparing for its full-scale mission.

On Feb. 9, Kim headed for the UAE to meet some 130 Korean troops there.

In addition, Kim expressed his gratitude for the support of military operation to capture pirates and save sailors of hijacked Korean commercial ship last month.

Kim visited Korean contingent named "Akh Unit," which was dispatched to the UAE last month for a two-year mission to help train the UAE special forces, and inspect the base as well as encourage troops.

"Kim's oversea trips will be an good opportunity to not only boost morale of Korean troops stationed overseas but also expand military exchanges with the UAE and Afghanistan," said a defense official in Seoul.
Posted by NO Base Stories of Korea at 8:39 AM