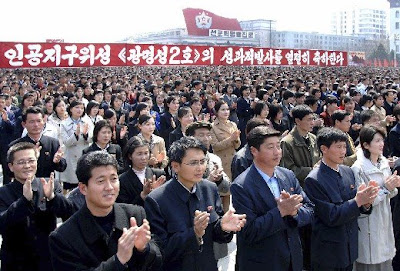 * Image source/ caption*
Same as the article below

" In this photograph released by the Korean Central News Agency, citizens in Pyongyang participate in a mass rally to celebrate the “successful satellite launch,” April 8. (KCNA)."

Amid talks by the international community over how to respond to North Korea’s rocket launch, the South Korean government is believed to have determined that it would support direct talks between Pyongyang and Washington under the framework of the six-party negotiations. An official at the South Korean government on April 8 said, “South Korea and the U.S. share common ground that the missile issue should be dealt with through the framework of the six-party talks,” the official said. In March, U.S. Secretary of State Hillary Clinton had proposed that North Korea‘s missile issue be on the agenda of the six-party negotiations.

At first, the strategy to deal with North Korea’s missile issue with possibilities of compensation at the six-party talks was seen as an intention to lure North Korea to a negotiating table. The idea was to let North Korea enter the talks by indicating the amount of return they could receive had the possibility of increasing.

For the U.S., the strategy of discussing the North‘s missile issue at the six-party talks was gaining acceptance because it was seen as a strategy that shares both responsibility and risk. Similar to the process of the missile talks between North Korea and the U.S. in 2000, the U.S. could present the offer to launch North Korea’s satellites into orbit in exchange for a suspension of missile launches. Alternately, Russia could offer to launch North Korea‘s satellites instead. What’s more, the strategy anticipates China‘s corrections and arbitration whenever talks between North Korea and the U.S. hit an impasse.

For South Korea, the six-party talks are the only way to stabilize diplomatic relations amid severed inter-Korean ties. Analysts see this as the reason why government officials have emphasized the need to resume the negotiations.

With the fact that North Korea’s long-range rocket launch is viewed as a sensitive issue between Pyongyang and Washington, “six-party talks” and a “North Korea-U.S. dialogue” have simultaneously appeared in official statements. Accordingly, the experts roughly agree that North Korea and the U.S. may be able to reach a broad agreement on the North Korea missile issue before the six-party negotiations as a step towards normalizing North Korea-US relations.

Other experts disagree, however, expressing concerns that if North Korea‘s missile issue is added as an agenda item to the six-party talks on North Korea’s nuclear weapons program, it could hinder progress from being made for a long time. A diplomatic expert, who asked not to be named, said, “It would take quite a long time for them to reach a ‘deal’ because they have to set up timetables for nuclear dismantlement and missile compensation.”

Posted by NO Base Stories of Korea at 6:34 AM