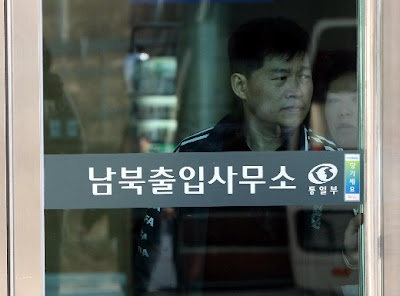 'A South Korean exits of the Dorasan CIQ located near the DMZ in Paju city serves as the main conduit to and from the Kaesong Industrial Complex in Gyeonngi Province, April 7.'

South Korean business owners in a Kaesong (Gaeseong) Industrial Complex border town expressed concerns yesterday that the government’s full participation in the U.S.-led Proliferation Security Initiative (PSI) would lead to the shutdown of the complex. Lee Im-dong, executive of a Kaesong business owners’ association, said, “Participation in PSI is a military action, which means that North Korea could take a military action as well. Since this would affect business activities in Kaesong, many business owners here are deeply concerned about it.”

A company owner who declined to be named said, “Pyongyang would not sit idle if the government pushes to join PSI and the Kaesong Industrial Complex would be closed as a result.” Lee echoed the opinions, saying, “It is right for the government to not participate in PSI.”

According to some officials, the administration is currently planning to fully participate in PSI. North Korea recently referred to it as an “ultimatum,” and added that it will take “stern” countermeasures immediately if Seoul pursues this course of action.

Business activities in Kaesong seem to be affected by North Korea’s rocket launch on Sunday. The Unification Ministry had called for business owners in Kaesong to minimize their workforce during the period (April 4-8) when North Korea was scheduled to launch what it calls a ‘satellite’ into orbit. The number of workers there has been reduced by half ever since.

An owner of an apparel maker located in Kaesong said, “We wanted to send eight workers to the industrial complex but the number was reduced by half due to the ministry’s recommendation,” adding that the “shortage of workers who can oversee operations hampers overall business activities.” He also indicated that if the government uses the complex for political purposes, it would ramp up anxieties and they would not be able to continue their operation there.

Some companies are complaining that their business activities were already severely hampered due to the North Korea’s imposition of an entry limit following the South Korea-U.S. Key Resolve joint military drill in March. Others are moving their factories to South Korea and China.

President Lee Myung-bak was quoted as saying that it would be desirable to take flexible measures aimed at helping companies in Kaesong facing different circumstances to continue their ordinary business activities. Cheong Wa Dae (the presidential office in South Korea or Blue House) officials explained that the president’s remarks meant that the government should take practical measures on labor issues depending on conditions facing each company.

As for the Hyundai Asan employee currently under detention by North Korea, Lee added that the company has to ask for his immediate release more actively, and if necessary the government will seek international cooperation in order to resolve the deadlock.