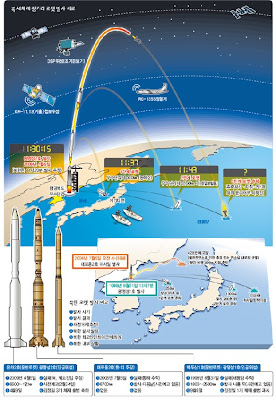 * Image Source/ Caption*
Same as the article below

North Korea carried out the launch of its previously announced experimental communications satellite Kwangmyongsong-2 on board the carrier rocket Unha-2, a Taepodong-2[Such a wrong description!] , at 11:20 am Sunday from a launch site in Musudan-ri, Hwadae-gun, North Hamgyeong Province. North Korea‘s state-run Korean Central News Agency reported Sunday afternoon that the Kwangmyongsong-2 entered orbit successfully nine minutes and two seconds after its launch, and transmitted melodies and measured information at 470 MHz.

The governments of South Korea, the United States and Japan announced that the rocket launch took place 15 seconds after 11:30 am, but they said that North Korea failed to carry its satellite to the orbit. South Korea Defense Minister Lee Sang-hee presented to the National Assembly on April 5 a report that North Korea’s launch was unsuccessful.

North Korea‘s first three-stage satellite launch vehicle, the Paektusan-1, had failed to put the Kwangmyongsong-1 satellite into orbit in August 1998. Both the United States and Japan confirmed that they considered this rocket launch a violation of United Nations (UN) Security Council Resolution 1718, which was adopted following North Korea’s 2006 nuclear test, and forbids North Korea from engaging in any activities related to ballistic missiles testing. The two nations have emphasized the need for a concerted response from the UN Security Council. Japan, which is a non-permanent member of the UN Security Council, requested an emergency meeting of the body 35 minutes following the launch.

Representatives of the 15 member nations of the UN Security Council, including the United States, China and Russia, were expected to convene Sunday afternoon (Monday morning in South Korea) and discuss whether the launch represents a violation of Resolution 1718. Sources have indicated that the U.S. and Japanese governments plan to present a new resolution demanding complete compliance with Resolution 1718.

In a statement issued on behalf of China‘s Ministry of Foreign Affairs, spokeswoman Jiang Yu expressed its hope that “related parties stay calm and exercise restraint, appropriately deal with the matter, and together maintain peace and stability in this region.” The statement also said that China “is willing to continue to play a constructive role” towards peace and stability in the region. China and Russia have not clearly stated whether they consider the launch a violation of Resolution 1718, and they have expressed negative positions toward the adoption of another UN Security Council resolution.

Pyongyang previously expressed objections to having this launch being referred to as a UN Security Council-level discussion matter, and warned it would take “strong measures” in response if it deemed necessary. Some are concerned if an additional resolution is adopted, North Korea will issue a hard-line response, such as: refusing to participate in the six-party talk process or halting the process of disabling its Yongbyon nuclear facilities,

Please direct questions or comments to [englishhani@hani.co.kr]
Posted by NO Base Stories of Korea at 6:05 PM