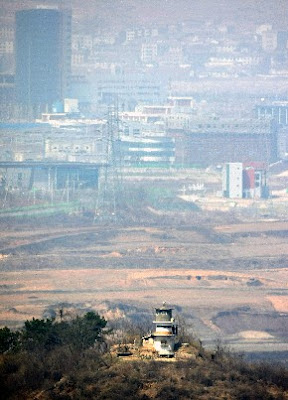 * Image source/ caption*
Same as the article below.

“Gaseong Industrial Complex buildings are visible behind a North Korean guard post taken on April 2 by the Dora observatory, a briefing center located in the southern area of the DMZ.”

http://english.hani.co.kr/arti/english_edition/e_northkorea/347792.html
N. Korea and Japan exchange retaliatory warnings regarding launch:
Expert believes N. Korea could have a successful launch, and it has not secured technology to miniaturize nuclear warheads
Posted on : Apr.3,2009 12:30 KST

With North Korea’s into to launch a “satellite” into orbit entering the countdown stage, a battle of wills between North Korea and Japan, as well as other nations, looms large. While the Japanese government makes gestures that some analysts indicate may be intended to exploit North Korea’s launching of a satellite as a political pawn to improve approval ratings, North Korea attempts to minimize the aftermath.

In an “important announcement” on April 2, a spokesman for the General Staff of North Korea’s military said, “It is the Japanese reactionaries, the sworn enemy of the Korean people, who are perpetrating the most evil doings over the DPRK’s (North Korea’s) projected peaceful satellite launch.” The representative of the Korean People’s Army also added If Japan recklessly ‘intercepts’ the satellite, it will “mercilessly deal deadly blows not only at the already deployed intercepting means but at major targets.” North Korea also warned South Korea and the United States, however with taking a softer tone, saying they should immediately withdraw its already deployed armed forces if it does not wish to be hurt” and ”should refrain from disturbing the launch.“

Analysts suggest North Korea’s “important announcement” is seen as a bluff against a bluff. Japan’s order to shoot down North Korea’s “satellite” is based on the presumption that the satellite or any of its debris falls onto its soil after failing to make it into orbit. If the “satellite” launched proceeds successfully as North Korea anticipates, there would be little reason for Japan to shoot down it. The announcement is seen as a justified retaliatory move against the Japanese government, who is at the forefront of advocating for hawkish actions against North Korea, including interception and sanctions.

Kim Byeong-yong, a researcher at the Korea Institute for Defense Analyses, a South Korean think tank, believes that North Korea’s launch may succeed, given its experiences gained from launches of its Taepodong-1 and Taepodong-2 missiles as well as technological cooperation with Iran, which successfully launched a satellite in February. Moreover, Kim, who spoke recently at an academic forum organized by the Institute for National Security Strategy, says he does not believe North Korea has secured technology to miniaturize a nuclear warhead, or developed a reentry technique for intercontinental ballistic missiles.