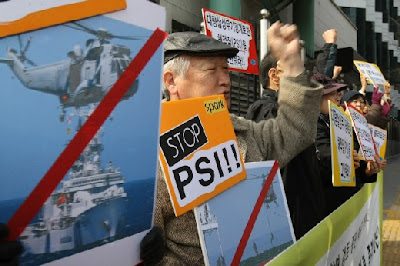 * Image Source/ Caption*
Same as the original article below

"Members of civic and labor organizations, including the Solidarity for Peace And Reunification of Korea, Korea Confederation of Trade Unions, hold a press conference to urge the South Korea government to stop the consideration of full participation in PSI in front of Foreign Ministry in Seoul on March 23."

There is growing tension between North and South Korea over the South’s plan to participate in the U.S.-led Proliferation Security Initiative (PSI).

The Committee for the Peaceful Reunification of the Fatherland, the North Korean Workers‘ Party organization responsible for dealings with South Korea said in a spokesman’s statement March 30 that if the South Korean government uses North Korea‘s “satellite” launch as an “excuse to fully participate” in the PSI, Pyongyang will interpret the move as a “declaration of war.” He added that Pyongyang would take “immediate decisive action in response.”

South Korea’s participation in PSI “will put a complete end to the already ruined state of inter-Korean relations and would be an inexcusable criminal act of placing Korean people in a horrific nuclear war,” the statement said.

A government official in Seoul called the reaction “expected.” Other officials said the government will refuse to let angry North Korean responses determine whether it participates in the initiative or not.  There have been no changes in Seoul‘s position since Foreign Ministry spokesman Moon Tae-young announced in the daily briefing for March 23 that the Lee Myung-bak administration is thinking about becoming a full-scale participant in PSI.

Some observers are suggesting that if Seoul announces that it will indeed participate in the PSI in a manner that allows the decision to be perceived as a response to North Korea’s rocket launch at a time when there are heightened tensions between the two Koreas over the issue, the agreements that exist between them on preventing military clashes at sea and on cooperating on maritime affairs could lose their force.  Experts say the issue of fully participating in PSI will heighten the risk of accidental military clashes and will pose a major obstacle to talks when the South Korean government needs to find ways to resume dialogue.